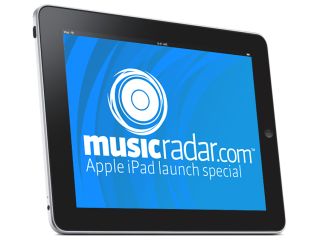 UPDATED FOR UK LAUNCH: The Apple iPad is finally here! For some, it's a sweet slice of techno beauty, a glimpse of a mainstream computing revolution and the saviour of publishing. For other, it's just a big iPhone and will end up being a Facebook machine for the sofa.

Whatever it is, it looks undeniably beautiful, genuinely feels like 'something important' and - let's face it - is also a new gadget for Apple nuts like us to nerd on until the Next Big Thing arrives. iPhone HD, you say?

So far, so geeky. But outside being able to rediscover all those Virtual Piano apps you downloaded for your iPhone and checking to see if there's a new Visualizer pattern in iTunes, what does the iPad hold for the musician rather than the music fan?

Answer? Lots! Well, maybe not right now but as developers, producers and musicians get to grips with Apple's new hardware and, most importantly, understand how iPad owners intend to use and abuse this new slice of loveliness, we believe the iPad will grow to be an important aide to modern musicians of all abilities and interests. Whether that's musician-friendly apps, touchscreen instruments or beginner's video lessons, only the future will tell.

But until that day, here's a useful selection of Apple iPad articles on MusicRadar for those lucky early adopters who've made the splurge and bought what is the most talked about gadget in the world. Have fun, download yourself a sexy MusicRadar wallpaper or two and tell us what you think in the Comments below.

9 musical things to do with your Apple iPad
Apps, ideas and a glimpse of the future

Will the Apple iPad work as a music software controller?
Multitouch king Jazzmutant shares its thoughts

Can you make music on an Apple iPad?
The pros and cons of the new tablet

Is multitouch the future of computer music control?
From the iPhone to Windows 7, all your questions...

ReBirth for iPhone - Reason for iPad?
For Propellerhead, this is surely just the start

Apple to release touchscreen DJing app?
Patent application suggests it could be on the way

5 iPhone music-making apps we want to see
GarageBand on your mobile, anyone?