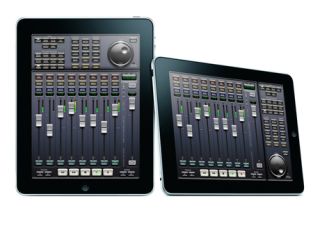 If you live in the US, 3 April is iPad launch day. Yes, the general public will finally be getting its hands on the tablet computer that Apple describes, in typically restrained fashion, as "magical".

As the reviews start to trickle out, we're sure you know what the iPad is all about, but as it lands in the laps of those who were eager enough to pre-order it, MusicRadar has been considering your musical options once you're unboxed and fired up.

1. Try your iPhone apps (or buy some)

Because the iPad is compatible with the majority of the iPhone/iPod touch apps that are available, it'll hit the ground running as a music-making device. If you already own apps, one of your first jobs should be to sync them to your iPad from your Mac or PC. If howevere you're new to the App Store, check out the music-making apps you voted as the best on the iPhone, and MusicRadar's round-up of seven more.

Just like music producers, DJs have been wondering what the iPad will be able to do for them. There are still obstacles to be overcome - only one stereo output plus the fact that apps can't currently access the iTunes Music Library, to name just two - but the potential is certainly there.

Don't believe us? Then check out the preview video of Sonorasaurus Rex for iPad:

This isn't the only iPad DJing app on the way, either. We've also learned (via Create Digital Music) that there's another called PadDeckX:

The consensus is that the iPad will have a bright future as a music software control surface. We've already told you about midipad, and Saitara Software has posted this mouth-watering teaser for its AC-7 Pro (via Create Digital Music):

Also, Novation's Automap for iPhone should run, while Steinberg's free Cubase iC gives you control of that DAW's transport.

Because of its larger screen, the iPad should be much more suitable for the playing of proper 'virtual instruments' than the iPhone/iPod touch. Here's touchGrove's Air Harp, which sports 15 strings and displays notation:

The App Store isn't exactly short of iPhone/iPod touch pianos, but unless you happen to have pencil-thin fingers, they can be frustrating to play. Ivory tinkling on the iPad should be more rewarding, particularly if you try MooCowMusic's forthcoming Pianist Pro (via Palm Sounds):

There's also Smule's forthcoming Magic Piano, which, quite literally, comes with a twist:

White Noise Audio has announced that it's submitted bleep!BOX 1.2.0 to the App Store. This is a Universal Binary, meaning that it runs on the iPhone/iPod touch and iPad from the same executable. The iPad version of this synth/drum machine gives you a much bigger interface to work on, and bleep!BOX can be viewed in both portrait and landscape:

Also, check out the video preview of SoundTrends' Looptastic, another app that'll be making its way to the iPad soon.

Because the iPad doesn't support Flash, lots of internet video will be unviewable, but the good news is that a bespoke YouTube app ships with the device. This means that all of YouTube's musical content will instantly be available to you - promo videos, tutorials, and girls covering Lady Gaga's Poker Face using four iPhones (for example):

There's HD support and clips can be watched in portrait or landscape. Might we humbly suggest you try a few of the lovely videos over at MusicRadar TV. End plug.

Although it's easy to sneer when the iPad is described as revolutionary, we're sure it'll have an impact in areas that even Apple hasn't considered yet. Take musical notation: the iPad's multitouch display could be perfect for those who write scores… and you can also imagine seeing an orchestra with iPads rather than sheet music on the musicians' stands.

Symphony, which has been confirmed for the iPad, could give us a glimpse of the future (via Create Digital Music):

Whatever you think of the iPad, what can't be denied is that it isn't a Mac tablet. If you want one of those, our suggestion is to fire up your iPad version of Safari and head to Axiotron's website, where you can order one of its Modbooks. Based on a MacBook 2.13GHz base system but modified to include a pen tablet interface, this'll cost you $1,849.

Can you make music on an Apple iPad?