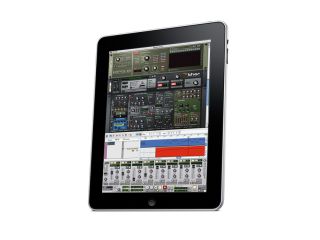 Reason on an iPad? We'd love to see it. (Image credit: iPad image courtesy of Apple)

While Apple's iPad is undoubtedly a stunning piece of technology, its positioning in what Steve Jobs calls a "third category" of product - somewhere between a smartphone and a laptop - makes it hard to evaluate in a music-making context.

In many ways, it's more like an iPhone than a MacBook, being based on the former product's OS and running almost all of its applications. This being the case, you will be able to make music on the iPad from day one, albeit using software that won't exactly stretch its processor.

Said processor - the new Apple A4 chip - will be the key factor in determining what music software developers will be able to do with the iPad in the future. They now have access to the SDK, so we'll have to wait and see what they come up with.

Early reports suggest that the iPad's processor is pretty fast - you shouldn't read too much into the fact that it's 'only' 1GHz - so there is cause for optimism. All it needs is for a big name app to come to the platform - let's say a version of Propellerhead's Reason, for example - and the snowball will be well and truly off the hill.

Remember that the first version of Reason could be run on a Pentium II 233MHz or PowerMac 604 and you'll start to believe that this could happen. It's also possible that Apple will develop its own music-making app - a version of GarageBand, perhaps.

The iPad has considerable potential as a wireless multi-touch controller, too. The likes of Steinberg and Novation have already released controller apps for the iPhone/iPod touch, so it's likely that they and others will produce similar tools for this larger device. The iPad could even turn out to be a more affordable alternative to JazzMutant's Lemur.

It isn't all good news, though. The iPad certainly isn't a touchscreen Mac and, for many, its 'closed' nature is going to be a source of annoyance rather than convenience. Peter Kirn airs several valid grievances over at Create Digital Music: the single port - a dock connector - is non-standard; content has to go through Apple's stores (and its approval process); and you don't have the power to decide which software and hardware you use.

It's important to remember, though, that Apple is still selling both desktop and laptop Macs; to go back to the original point, the iPad is designed to complement rather than replace anything in its existing product line. However, whether we'll also get a multi-touch OS X-based machine - the computer that most Mac users really wanted to see - remains to be seen.