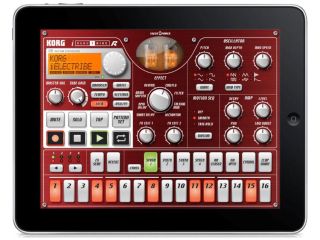 Electribe on the iPad

PRESS RELEASE: For over a decade, Korg's Electribe R has been a must-have item for dance and creative electronic musicians around the world. Now, you can take the power of the Electribe with you anywhere with the iPad musical instrument application, bringing the fun of analog-synth style beat making to your iPad.

The vacuum-tube equipped Electribe MX and SX went on sale in 2003, followed by the updated MKII versions of the Electribe A and Electribe R. The year 2010 marks another chapter for the Electribe family, with the Electribe R now available as one of the world's first dedicated iPad applications - iElectribe virtual analog beatbox.

While fun to use, the iElectribe is no toy; it brings to the iPad the legendary capabilities of the Electribe series. Sound creation is easy and intuitive, just as on a vintage analog synthesizer. Simply touch the step-sequencer's sixteen individual step keys to quickly build a groove.

This simple and understandable interface offers an intuitive "hardware" feel that will captivate the imagination of anyone - those familiar with the Electribe's power, and those who are experiencing it for the first time!

The sample-based PCM parts deliver realistic drum hits, cymbals, and more. Using the Accent function adds emphasis where you need it - vital for creating compelling grooves. All in all, that's eight programmable parts combined with the easy-to-use 16-step sequencer, anyone can start creating powerful beats instantly!

64 preset patterns ready for immediate use

The 64 preset patterns cover a broad range, including familiar patterns from the Electribe R as well as the latest new patterns created especially for the iElectribe. They cover a wide variety of dance music styles including techno, house, electro, trance, drum 'n' bass, dubstep, hip-hop, and R&B.

The number and quality of the master effect have enhanced from the original Electribe R, as well as optimized for use in today's music scene. The eight effect types can spice up your beats in a variety of ways that can become indispensable. Inherited from the flagship Electribe MX and SX are effects such as a chorus/flange that fits any type of sound; a tempo-matching BPM delay; plus effects such as a grain shifter and decimator which can dramatically transform the sound.

Motion Sequencing allows your sound enhancing knob-twisting and tweaking to be memorized and replayed as part of a pattern. The original Electribe R was limited in the number of parameters that could be memorized, but the iElectribe can memorize all the parameters for each and every part!

This Motion Sequence function goes beyond the original, so you can create diverse and complex patterns like never before.

Korg iElectribe for iPad will be on sale via download at Apple's App Store (inside iTunes Store) for USD19.99.

As a special introductory offer, the iElectribe for iPad will be available at half price - USD9.99 - until June 30, 2010.