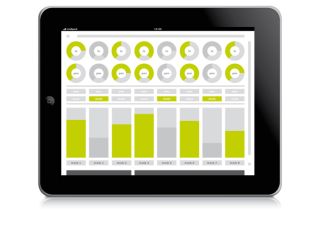 The midipad iPad controller App has already been announced.

While many musicians have been focusing their thoughts on whether Apple's iPad will be a platform on which they can create tunes, there's also the question of the new tablet's potential as a multitouch controller to consider.

On the face of it, the iPad looks almost as if it could have been designed for music software control: it's a good size; it supports various wireless protocols; and we already know that the iPhone/iPod touch (which uses a very similar operating system) can perform this role.

What's more, the first controller app - the midipad - has already been announced.

But is the iPad really going to change the way we interact with our software? The company that's led the way in the world of multitouch control is Jazzmutant, with its Lemur and Dexter controllers, so we spoke to them to find out.

As a company that makes multi-touchscreen based controllers, what do you think the iPad's potential is in this area? What would you consider to be its strengths and weaknesses?

Jazzmutant: "The iPad is definitely a great product which will achieve what we all expect: a massive democratisation of touch-aware devices. The device looks beautifully designed and we believe it has the potential to revolutionise the whole creative industry. Furthermore, its aggressive pricing is definitely a huge advantage which will appeal to many consumers. That being said, it's still unclear how suitable it will be for music performance as nobody has yet seen the unit in action.

"Our main concern is that the iPad (like the iPhone) uses capacitive technology, rather than digital resistive technology (like the Lemur), which comes with a set of disadvantages that are particularly disturbing in a live performance scenario.

"Capacitive touchscreens do not track well with wet or sweaty fingers. With the stress and heat (and dangers posed by punters with drinks!) of a packed concert venue or club this is not good news. Reliability and consistency are two key factors for people playing live, and we are a little sceptical about the iPad's performance on stage. Not to mention that the use of wi-fi in live performance is brand new and has yet to be proved.

"The Lemur is built for live usage. It was designed to withstand the stress of life on the road. The Lemur, adopted by many professionals, has proved itself to be extremely rugged and reliable - the iPad has yet to do this."

Does JazzMutant consider the iPad to be a potential rival, or is it operating in a different sector of the market to the one you're in?

Jazzmutant: "Having been at the forefront of touch innovation for seven years now, Jazzmutant has been watching the fast evolution of the multi-touch landscape. We expect to see a lot of Lemur rip-offs showing up on the App Store, as well as other multitouch capable devices. However, we believe that it's not really the same kind of product. The Lemur is a device dedicated to music and visual control. The iPad, on the other hand, is a mainstream product, a 'jack-of-all-trades' that's not specifically tailored to musicians' needs.

"Multitouch hardware is only one part of the equation; at the moment there are no apps offering the power (advanced interaction, physical and scripting possibilities) and software maturity offered by the Lemur.

"Jazzmutant are about to launch their new product Mu which uses Max for Live to offer tighter integration with Ableton Live than any iPad App (or any other controller) is likely to offer in the near future.

"It is also true that many professionals are unwilling to become early adopters of new, untested technology so there will remain a market for Jazzmutant's tried and tested, mature technology and software."

Would you ever consider developing a controller app for the iPad?

Jazzmutant: "Here is our philosophy: whilst multitouch technology is undeniably good, it's not the final destination. It is merely a step towards a more natural interaction between users and computers.

"So, what about an iLemur on the App Store? Well, what we are focused on today is the next giant step. We cannot disclose our plans right now, but we are confident that it will make devices such as the iPad look less appealing very soon.

"The Lemur will continue to be the choice of many professionals. However, you can be sure that whatever happens, you will most definitely be hearing exciting news from JazzMutant again in the future."