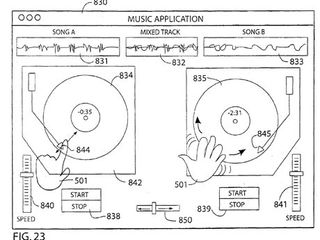 The real interface would have a splash more colour, we presume.

It seems that Apple has submitted a patent application for a touchscreen DJing program. This features a diagram that suggests the software would mirror the look and feel of a pair of vinyl turntables.

Of course, the existence of a patent application doesn't guarantee that the software is in development, but Apple has frequently been rumoured to be working on some sort of touchscreen computer. And of course, the company's iPhone and iPod touch products already enable you to get 'hands-on'.

The patent application gives us a good idea of how the software might work. Digital music files would be represented by two slabs of virtual vinyl, and there would be crossfader and pitch adjustment controls. The diagram features waveform displays, too, while fingertip-powered scratching would also be possible.

The prospect of an Apple DJing application is certainly an exciting one - in the face of competition from the likes of Native Instruments' Beatport Sync, MusicRadar has long thought that the company should introduce mixing functionality to iTunes.

It's exceedingly unlikely that the existence of such a product will be confirmed or denied by the company before it's released, though; until then, the speculation will continue.