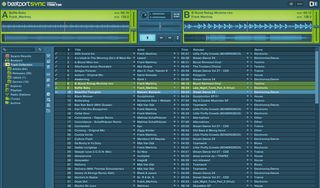 Manage and mix your music in Beatport Sync

Apple's iTunes is undoubtedly the dominant music management software, but one thing it doesn't give you is the ability to mix one track into another. However, this is precisely what you can do in Native Instruments and Beatport's freely downloadable Beatport Sync.

This new software - which is powered by the technology behind Native Instruments popular Traktor application - comes with two playback decks and a crossfader section. Beat detection, tempo syncing and loudness optimisation are all dealt with automatically, so the theory is that anyone can quickly and easily start DJing and creating their own mixes.

Crucially, we're assured that Beatport Sync will integrate seamlessly with both iTunes and the iPod, while it should also be noted that it supports a wide range of compressed and uncompressed audio formats (more than Apple's software). It also links directly to the Beatport music store.

Beatport Sync runs on Mac and PC and is available for download now on the Native Instruments and Beatport websites.