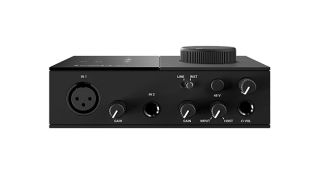 For music makers using software, an audio interface is essential. In fact, it's what turns a computer into a simple home studio set-up.

Even a cheap audio interface can completely open up your music making, allowing you to record instruments, monitor on headphones and play back your work on studio monitor speakers.

Fortunately, it’s possible to pick up a good quality, straightforward audio interface without having to flash too much cash. For this best budget audio interface guide, we’ve compiled the top options available at the very lowest end of the price spectrum.

What is the best cheap audio interface?

Combining a functional, but sleek, smart design, flexible usability and including a very respectable selection of bundled software, Native Instruments’ Komplete Audio 1 is probably the best budget audio interface you can get for under $120/£100 right now. Focusrite’s Scarlett Solo is slightly more flexible than NI's offering, got an update last year, so is well worth a look too.

If price is your main consideration though, Behringer’s great value U-PHORIA UMC22 is a solid and well-equipped box that you can pick up for less than £/$40. Build quality and long-term compatibility isn’t up there with the best in this round-up, but as a rock-bottom entry point you could do a lot worse.

Having said all of the above, in all honesty there’s often very little difference between rival interfaces at this price point. If you're looking at the top half of the list, in particular, there’s really not that much in it, so if you see a great deal on one particular audio interface, we'd recommend going for it. As ever, shop around.

Ins/outs
When you're looking at the most affordable audio interfaces, realistically you’re not going to find a decent interface with more than two inputs and two outputs. Unless you’re planning to spend more, the most you’re going to be able to record is two mono or one stereo input/s, and outputs will be limited to – at most – a stereo pair for studio monitors and a separate headphone output.

What’s more important to consider is the type of ports offered. Audio interfaces will offer some variety of mic and instrument inputs, which operate at different levels and use different connection types to suit either a microphone lead or jack from a guitar, synth, drum machine, etc.

The most useful variety are ‘combo’ inputs, which can accept either lead type and will usually have a control for switching between mic and instrument levels. If you’re planning on using a mic with your interface, it’s worth checking if you need ‘phantom power’ – this is the 48v signal sent by interfaces and required by some mics.

Compatibility
Every model in this best budget audio interfaces guide can be used with both Mac and PC setups, and many can also be used with Apple’s mobile iOS devices too. You will see lots of interfaces described as ‘class compliant’ which essentially means they are plug-and-pay with iPhone and iPad. Some come complete with the appropriate ‘Lightning’ connectors, while others will need Apple’s USB-to-Lightning Camera Connection Kit’ adapter.

Bundled software
Like many types of studio hardware, audio interfaces often come packaged with a variety of software to sweeten the deal. At this price, particularly if you’re just getting started, it’s worth paying attention to these bundles. Offerings range from lukewarm packages of ‘LE’ (often limited, entry level) versions of major applications to full versions of genuinely great synths and effects. If you’re yet to kit out your software studio, this could really help!

The best budget audio interfaces you can buy today

NI don’t have the audio interface pedigree of some of the brands in this list, with just three I/O boxes amongst their current line-up of products – including the slightly higher spec’d Komplete Audio 2. This is no sub-par imitator though. As with pretty much all recent NI gear, the Komplete Audio 1 is well designed and sturdily built, offering features ideal for bedroom producers.

It benefits from being part of NI’s Komplete ecosystem too as the free software that comes bundled here includes an excellent plugin synth and a trio of effects that are arguably worth the price of entry alone. For producers just getting started, this is an excellent value package.

Pro-level preamps in an affordable box

Focusrite are one of the best known names when it comes to audio interfaces, and the higher-end units in their Scarlett line are favourites of many intermediate and pro level producers. Their pre-amps are highly regarded, and having one in an interface at this price makes this a great option for those looking for high quality recording on a budget.

The Scarlett Solo does a stellar job of diluting the appeal of its bigger siblings into something smaller and more affordable; keeping the solid build, sharp looks and quality pre-amps but trimming the features down to the bare necessities.

Looks aside, this is an excellent all-round package

Another solid choice of interface from a well-regarded brand name. Looks-wise, the Audiobox isn’t as sleek and sharp as some of its rivals in this list, but other than that there’s little bad we could say about it.

The two combo inputs offer as much flexibility as you’re going to get at this price point. The bundled software package is nothing to scoff at either, with an entry-level version of Presonus’ excellent DAW Studio One, plus a tidy bundle of effects from some well-regarded names.

The UR12 is one of the older interfaces in this guide but that’s no reason to overlook it. This compact 2-in/2-out interface is built into a rugged metal container, which makes it one of the most durable-feeling interfaces at this price point – although that does come at the cost of it being fairly weighty.

The fact that the main and headphone outputs share a single volume control is our only other real criticism here. On the software side of things, the UR12 comes with cut down versions of Steinberg’s Cubase DAW for both desktop and iOS. These are both thoroughly usable, although as a package it’s not as generous as NI or PreSonus’s offerings.

Read the Steinberg UR12 review

We’ve placed takeaway orders that have cost us more than what Behringer’s UMC22 retails for, so it’s hard to quibble with this one on price. You do, of course, get what you pay for to some extent, and there are a number of areas where the UMC22 lags behind its pricier rivals.

For one thing, the max resolution here is 16-bit, which is still CD quality and will most likely be fine for most users, but is worth being aware of. The U-Phoria range doesn’t have its own designated driver either, and relies on the universal ASIO4ALL (although this is still a free download). Also, while build quality is in no way poor, we wouldn’t want to bet on the UMC22 outlasting the devices at the top of this list.

All that being said, there are no outright deal-breakers amongst these downsides and at this price, if you need something cheap to get going with, you could certainly do a lot worse.

A smart compact interface from a newcomer to the market

Mainly known for their collaborative music software, BandLab are another brand without much history to lean on when it comes to interface design. Despite this, their first hardware unit is impressive.

This compact box manages to squeeze in a combo mic/instrument and gain control. The Link Digital’s main downside compared to more expensive options is its limited output ports. There’s both a headphone and main output, but the latter is a single stereo jack, rather than a standard pair of jacks or RCA output (although the interface does come with a splitter cable).

A great budget audio interface for build and price

To be honest, there’s not a lot to say about Mackie’s Onyx Artist 1.2 that can’t be gleaned from reading the specs. It’s a solid-enough, inoffensive-looking interface with both mic and instrument inputs, and a fairly standard range of controls.

In all there’s not much to make this interface stand out from its rivals, but there’s also very little we can say about it that’s negative. The price point is thoroughly reasonable too. It comes bundled with its own slightly stripped back version of Tracktion Waveform, which is an excellent piece of recording software, although it might not appeal to newcomers in the way that Ableton Live, Cubase or Maschine does.

The best budget audio interface for guitarists on the go

Great for guitarists
Very compact
No monitor outputs
Not the cheapest

Italian brand IK make a whole host of mobile-compatible interfaces and peripherals, including this compact and budget-friendly interface. The iRig HD 2 is aim primarily at recording guitarists, but its instrument interface would work fine for any monophonic electronic instrument too.

The iRig HD works cross platform with PC, Mac and iOS, and comes with both USB and Lightning connector cables. Because it’s designed for mobile use, it’s ultra-compact too – small enough to tuck into your pocket and it even includes a mic stand clip.

The downside to this mobile design, however, is the lack of monitor outputs. You do get a headphone output through, as well as a monophonic jack output designed to be plugged into a guitar amp, which can either monitor the input or output from software on the computer/iOS device.

A compact recording solution for both instruments and mics

The Core 1 is another audio interface aimed directly at mobile recording, meaning it’s designed with both on-the-go laptop use as well as iOS devices. Unfortunately, compared to IK’s iRig range, there’s no Lightning cable in the box, meaning you’ll need Apple’s Camera Connection kit to hook it up to an iPhone or iPad.

The Core 1 is a very compact and convenient interface that would be easy to take out and about. Again though, this convenience is traded for a lack of proper monitor outputs.