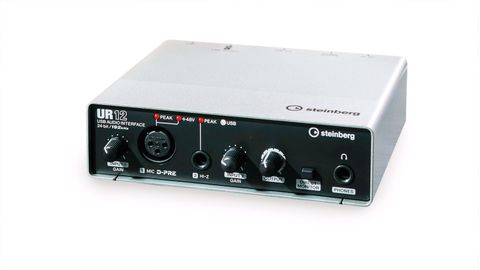 At this price, it's impossible not to recommend the UR12 to anyone seeking an on-the-go solution for recording.

The latest in Steinberg's UR range of USB 2.0 audio interfaces marks the bottom of the pile in terms of price and I/O, but matches the rest of them for build quality and compatibility (Mac, PC and iPad, via 30-pin- or Thunderbolt-to-USB adapter).

An austere-looking metal-framed slab measuring 159 x 144 x 46mm and weighing 850g, it's not the smallest or lightest mobile interface we've ever come across, but it's certainly one of the sturdiest.

Power is supplied via USB from a host Mac or PC, with a separate Micro-USB input onboard for providing juice from the mains or a USB battery when used with an iPad.

Aimed at singer/songwriters and other musicians on the move, the UR12 features a single XLR mic input with optional phantom power, alongside an unbalanced 1/4" jack for hooking up a guitar or other mono source.

Each input has its own gain knob, the XLR feeds into a Yamaha D-PRE preamp, and the A/D converters do their thing at up to 24-bit/192kHz quality. At the other end of the line, the main outputs comprise a pair of phonos, sharing a single volume knob with the 1/4" headphone out.

We're not fans of that particular approach to monitoring, although it probably won't bother the target market too much. Finally, as you'd expect from any interface these days, a Direct Monitoring switch is on hand to feed the inputs directly to the outputs.

Apart from the combined output volume control and, perhaps, its weight, we really can't find anything to complain about with the UR12. It sounds great, runs smoothly and could survive a nuclear blast. Oh, and you also get a download code for Cubase AI 7 in the box.

With support for up to 32 audio tracks, 48 MIDI tracks 28 effects and 180 sample-based sounds in the shape of HALion Sonic SE, this heavily cut down but perfectly usable DAW for Mac and PC could make a great introduction to the world of production for the fledgling musician in your life.