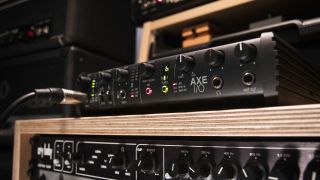 Let's be honest, traditionally audio interfaces have been know as dull as dishwater devices designed to turn your instrument’s sound into ones and noughts for your laptop or PC to process. In 2020, however, things have moved on, particularly when it comes to the best guitar audio interfaces, and the music world is overflowing with innovative and incredibly desirable products.

Essential features of any audio interface are high quality A/D (analogue to digital) converters and sufficient I/O (inputs and outputs) to connect instruments and microphones. Still, you’ll find various additional functions as you explore the marketplace, so read on as we take a look at some of the top audio interfaces for recording guitar.

What is the best guitar audio interface right now?

Every audio interface here is a worthy product, but IK Multimedia’s Axe I/O is among the best. Featuring two instrument inputs (plug your electric guitar or bass guitar in here!) and dual phantom powered combo inputs (for use with condenser mics and line level signals), the Axe I/O offers plenty of, er, I/O for recording your, erm, axe.

Joking aside, the ace in IK’s pack is the included Amplitube 4 Deluxe amp/FX modeller – the not quite flagship but still impressively featured plugin/app you can use in place of your ‘real’ gear. Even if you’re dead set on hardware, the potential for tonal experimentation before recording is worth the price of entry alone.

So, you’ve been strumming, riffing and writing, now you’re ready to splash the cash on a killer home recording setup so you can lay down your music. So what should be your key concerns when it comes to finding the right guitar audio interface?

Well, assuming you’re recording at home, your requirements are likely to be fairly modest, at least in terms of the features you’ll need – and that means you don’t need to spend huge sums to start recording.

All of the interfaces we've recommended here include a Hi-Z instrument input which accepts the low output of passive bass and electric guitar pickups – just plug in your guitar cable as you would into your amp and flip the Hi-Z button if there is one.

Mic’ing up acoustic guitars, pianos or hooking up a vocal mic? You’ll most likely use an XLR cable, so look for XLR, or, even better, combo XLR/jack connectors. One is useful; two means you can mic up in stereo for wider dispersion in your mix. And, if you’ve splashed the cash on a condenser mic, your interface will need to supply phantom power too.

Each of these guitar interfaces comes bundled with software – though some more than others. For guitarists, you can’t beat amp modelling and FX plugins. You may be happy with your pedalboard but it’s super handy to be able to chop and change the plugins at mixdown. Some interfaces here even include fully fledged DAWs. Quite the bargain.

By now you should know what you're looking for, so let's get into it!

Tone is an essential consideration for every recording guitarist, and the Axe I/O comes with bucketloads of options, thanks to the inclusion of IK Multimedia’s Amplitube 4 Deluxe amp/FX modeller which features digital amplifiers, cabinets and stompboxes, as well as an eight-track recorder and looper.

If you prefer ‘out of the box’ recording, the Axe I/O has you covered with twin mic/line connectors for stereo recording and a reamp option to re-record DI’d parts through a favourite amplifier.

And with phantom power for condenser mics, MIDI/expression pedal connections to control Amplitube, as well as an onboard tuner, the Axe I/O proves to be one of the best equipped audio interfaces available for guitarists. If it’s good enough for Joe Satriani…

One of the best all-round audio interface bundles for guitarists

Focusrite has an enviable reputation for high quality preamps and digital converters – quality which can be found in their latest Scarlett 2i2 (3rd Gen) model. The dual inputs feature Focusrite’s ‘Air’ effect for a taste of the company’s classic ISA preamps. They also act as Hi-Z connections for guitar and bass, line level ins for jack or XLR cables and can supply 48v phantom power for condenser mics.

Standard line level and headphone outputs are onboard, and, though there’s no digital connectivity, it’d be churlish to complain at this price point.

Included into the bargain are Pro Tools | First and Ableton Live Lite DAWs and plenty of guitar-oriented plugins. More than enough to get any recording guitarist underway.

The best guitar audio interface for players on a budget

Presonus have cannily delivered an impressive package in the Audiobox 96 USB thanks to the inclusion of their Studio One DAW and Studio Magic plugin suite. Just install the software to your computer, connect up, then plug your guitar into the Hi-Z input and start recording in one of the most respected DAWs on the market.

The interface is bus powered, which means you can take it anywhere and run it direct from USB. Mobile laptop recording, anyone? Yes indeed! And, with 48v phantom power, dual mic/line inputs and MIDI I/O for use with external controllers and expression pedals, it’s fair to say that Presonus’ robust little box delivers everything a guitarist could need without any unnecessary extras!

There’s a saying that quality doesn’t come cheap. Well, one look at this interface suggests the folks at Audient are not living by that old adage. A simple two-in/two-out USB interface, the iD4 includes class A mic preamps from the company’s high-end consoles, and high performance digital converters too – all wrapped up in a robust all-metal casing.

There’s no stereo connectivity, but the all-important Hi-Z guitar and bass input is present, as is a 48v phantom powered mic/line in for condenser mics. The tactile iD knob controls on screen switches and faders in your DAW and there’s iOS support for recording on the go.

Factor in the dual headphones (handy if you’re recording another musician) and you have a tidy package for only a little of your hard-earned!

There’s so much to love about this interface. Its extensive feature set, albeit without MIDI I/O, is impressive, and the intuitive and tactile layout coupled with its metal casing and touchscreen interface make Antelope Audio’s Zen Tour that rarest of beasts: an audio interface you can actually get excited about!

Antelope Audio clearly have guitarists in their sights too; the built-in DSP effects include amp and cab models as well as a raft of classic studio gear emulations for honing your mixes.

Add to that high quality digital conversion, plentiful I/O (expandable via ADAT or S/PDIF), talkback, dual-reamp outs and dual-headphone connections and you have a genuinely useable interface both at home or in a small project studio.

A ‘light’ version of UAD’s flagship Apollo 8 and 16 models, the Twin MKII Solo brings a taste of pro quality audio to any home or project studio.

As for guitarists, at this price point it’s a tad feature-light, including the requisite Hi-Z instrument input but lacking reamping or much in the way of amp models compared to many rivals. Marshall Plexi (guitar amp) and Ampeg SVT-VR (bass amp) models are included, either to record through or to run in your DAW during mixdown, alongside compressor, limiter, preamp, distortion and reverb plugins.

Mic up a cabinet, acoustic guitar, or anything for that matter, and you’ll hear where your money’s been spent! The Unison preamps and A/D conversion offer a taste of the high end at a reasonably affordable price.

Mac, PC and iOS support
Easy to get started
Amplitube included
Android support would be nice

One of the simplest and most affordable interfaces in this guide, the iRig HD 2 is perfect for guitarists taking their first steps in recording. With no complicated setup, it’s a case of just ‘plug in and play’, sending your signal digitally to your Mac, PC or iOS device, or from the HD 2’s analogue output to an amplifier – the latter can add effects from Amplitube (provided you’re connected to a device running the program) or send an unprocessed signal. There’s also a headphone output and a clip to attach the iRig 2 HD to a mic stand.

Simple? You bet! But with Amplitube 4 for Mac and PC as well as Amplitube for iOS included in the deal, you get a whole lot of interface here.

Never recorded a thing in your life? Apogee’s Jam+ may be all you need to ease you into capturing your creative endeavours thanks to its stripped back feature set and simple ‘plug in and play’ functionality.

The diminutive device features just one input – a 6.3mm jack which accepts guitar, bass and line level signals from keyboards and synths. Keep it clean or dial in a dirty sound with the Jam+’s overdrive mode.

For outputs there’s a 3.5mm headphone socket (which can also drive powered monitors), and a micro USB port for connection to Mac, PC or iOS devices. And, once you’re up and running, you can explore amp and FX models in Positive Grid’s included BIAS FX Jam software. There’s a lot to like in this small package.

Combining a 12AX7 valve preamp and three-band tone controls with Two Notes Torpedo power amp modelling and cab simulation, Audient’s Sono is aimed squarely at guitarists. The valve offers analogue warmth and you can drive it harder with both gain and tone controls – just like a real amp! Dial in one of Torpedo’s 20 included amp/cab models and there’s enough heft for medium gain rock and blues tones.

The clear layout makes the Sono one of the best guitar audio interfaces to use out of the box, and the virtual recording space, power amp and mic models of the Torpedo interface feel intuitive to use. And, with connections for DI’d guitar/bass, reamping and high quality stereo mic preamps, including 48v phantom power, the Sono proves to be a versatile interface.

Long in the tooth now but still a great recording solution

The now aging GT-001 is a desktop version of the company’s GT-100 multi-FX floor pedal, complete with 200 presets, 200 user patches and Roland’s very own effects and COSM amp models. It also happens to be a fully functioning audio interface.

But that’s not what the GT-001 is about. As an interface, this is for guitarists who want to get recording quickly and easily. Well worth a look if your tonal requirements are deep but your recording needs are basic.