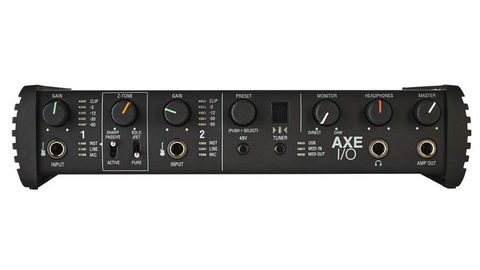 A well thought out box for guitarists at a decent price.

Those of you who embark on any home recording these days will likely be using a computer to take  advantage of the absolute wealth of facilities provided by modern DAW software such as Pro Tools, Logic, Cubase or Reaper, just to name a few, and perhaps also using amp sim plug-ins including AmpliTube, BIAS, Guitar Rig and so on.

The thing is, although there’s plenty you can do to your guitar tone once it’s recorded as digital data on the hard drive, it makes absolute sense to record the signal as well as possible in the first place. As that ancient recording engineer’s saying goes, you can’t polish a turd.

What you need, then, is a decent audio interface that will take the signal from your plugged-in guitar and send it - digitised - to your DAW. This isn’t just a matter of having quality A/D conversion onboard, it’s also important that the front-end of the audio interface (the preamp that first sees your guitar signal) handles it in the most sympathetic way.

IK Multimedia believes that it has sorted this with its new AXE I/O audio interface, which the company says has been designed from the ground up with the goal of providing the best possible interface for guitar players. A two-in/five-out audio/MIDI interface capable of up to 24-bit/192kHz resolution, the AXE I/O features all the usual input and monitoring options but also sports a guitar input. This can be optimally set for passive or active pickups, has a choice of two preamp topologies including JFET, and has variable input impedance that you can dial in with a knob to set how the unit interacts with your pickups.

On top of that, there’s an extra ‘amp out’ socket for easy reamping (sending previously recorded guitar to an amp to be re-recorded with amp tone), a built-in tuner, and a knob to directly access presets in AmpliTube, which you get bundled (in its AmpliTube 4 Deluxe form), with the AXE I/O alongside 10 T-RackS 5 processing plug-ins and Ableton Live 10 Lite.

Connect the AXE I/O to your computer via USB, set it as the preferred interface for the software you’re using, connect some monitoring - and you’re ready to go! Two sets of rear-panel line outputs can connect to powered monitors or any other monitoring setup, but if you prefer to be using headphones, there’s a socket right on the front panel with its own volume knob. Another front panel knob adjusts where you’re hearing the sound from: fully left, it offers the direct sound at the input; fully right, you get the sound coming from your DAW. Blends between the two could help combat any audible delays through round- trip latency, but we experienced no latency issues at all in use. If you want to record microphones or line level inputs, there’s a pair of XLR/6.4mm combi sockets on the rear panel with switchable 48-volt phantom power for condenser mics.

While we get good results from using mics and line inputs, with each channel’s levels easily set by a gain knob allied to a five-way LED ladder, it’s really the guitar recording that we’re most keen to investigate. The second guitar channel simply has a gain knob, but the main guitar channel offers the adjustable input choices, the first setting being for active or passive pickups. Beyond this, you have a choice of two different preamp topologies: the Pure setting gives you the cleanest signal path possible, while JFET is designed to add colour and harmonics to the guitar signal. It’s a subtle difference, but it’s good to have that choice.

The secret sauce here, though, is the Z-Tone knob, which changes the input impedance and can undertake more dramatic tonal shading. The knob is marked from Sharp to Bold and that pretty much sums up what it does, moving from a bright sound to something thicker, warmer and more subdued - useful if you’d like to tone down harsher sounds.

Reamping is easily set up through the ‘amp out’ output, which lets you feed a DI-recorded guitar from your DAW (or a live parallel feed from Input 1) to a real amplifier or stompbox(es), while still being able to monitor the session from the main output. The Amp Out’s floating unbalanced output topology and switchable ground lift negates any noise or hum from ground loops when interfacing with amps. If you bring the reamped signal back through guitar Input 1, the Z-Tone can also come in pretty useful if the reamping is being done via a vintage pedal, because its sound can change depending on the load impedance.

Besides recording to a DAW, you can use the AXE I/O to access amp simulations on your computer for practice. If you’re using AmpliTube, the front-panel Preset knob lets you change presets without using a mouse, and a pair of rear panel controller inputs provide connection for expression pedals and footswitches for real-time control of various parameters of your virtual rig. These can be assigned in the associated Control Software app, which also lets you set up other MIDI functions and gives you extended metering and control over levels and routing, including the Amp Out button. You can route the Input 1 signal directly to the Amp Out with zero latency, so you can easily record both a clean DI signal and your amplifier simultaneously.

Why buy the AXE I/O over any other audio interface? Well, as audio interfaces go, this one has decent specifications and all the facilities you’d need for standard recording tasks and being able to take input from microphones, line-level sources and instruments. But where many simply have a one-size-fits-all instrument input, the dedicated Number 1 guitar input here can make a real difference in the quality of your guitar recording. Not just that, the Amp Out facility makes getting signal to your amp and back into the DAW a real doddle.