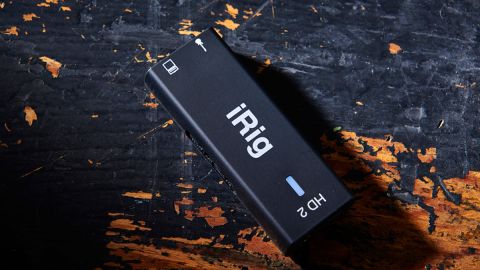 With the included software, this is a brilliant entry into using your guitar with digital devices - and a no-brainer for iPhone 7 users.

The iRig HD was a simple affair.

You plugged in a guitar at one end and set its level with an input gain control, while a cable at the other end took your signal to a computer or iOS device.

As it had no headphone socket, you had to monitor direct from the connected device, but Apple's decision to delete a dedicated headphone jack from its new iPhone 7 has been a catalyst for a rethink.

Now, this new version adds two analogue outputs: one for headphones, with a level control; the other to connect to an amp or PA with a switchable choice of sending the sound either unprocessed or as processed through the amp sims on your connected device, making it possible to use phone-, tablet- or laptop-based effects in a live situation.

With 24-bit/96kHz operation, the iRig HD 2 sounds good and nothing is lost because it ports a digital version of your guitar sound to its high-tech destination, while offering accurate monitoring through the headphone output.