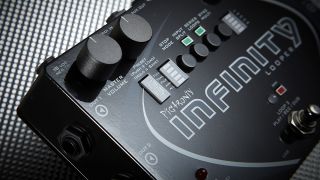 Loopers are among the most useful pedals available to guitarists and in this best looper pedals guide we’re introducing you to the cream of the crop. Put simply, these pedals enable you to record your playing, then the pedal loops it ad infinitum, allowing you to play a different part over the top.

You can then overdub as many times as you like, building up complex layers that make you sound like far more than just one guitar player. Lest we forget that Ed Sheeran sells out stadiums with just an acoustic guitar and a looper at his feet (although all that is set to change) .

Of course, there’s a wide array of loopers available to suit anyone from players taking their first steps in overdubs, right up to seasoned professionals. Thankfully, we’re here to save you from going loopy as you hunt down the best looper pedal for you.

What is the best looper pedal right now?

Pedal icon Boss is virtually synonymous with looping, and accordingly, you can’t go wrong with either of its two more contemporary offerings. The RC-1 is an affordable yet highly functional offering. It features a single footswitch that handles record/dub, play/stop and undo/redo functionality, and can be expanded with external footswitches as your loops get more advanced.

Its bigger brother, the RC-10R, meanwhile, serves up two tracks for switchable song parts, as well as a plethora of real-time adjustable rhythm patterns and the ability to store up to 99 loops. If you’re seeking a band in a box, look no further.

How to buy the best looper pedal for you

All the loopers we’ve included in this buyer’s guide have a number of key features in common. Each boasts unlimited overdubs, so there’s no limit on how many tracks you can stack on top of each other, as well as undo/redo - which allows you to cancel the most recent overdub and bring it back in - as well as play/stop, which does exactly what you’d expect.

The chief deciding factors lie in the number of tracks you want available at your feet. A single-track looper is great when you want to embellish the odd section, or use it on a song or two in your set.

But if your live show is built around looping, you can get loopers with two, three or even four tracks, which allow you to set up different song sections (verse, chorus, bridge, etc) that can be switched between on the fly.

Accordingly, you’ll need to think about how many footswitches you have at your feet, although it should be noted that many single- or double-footswitch loopers can be expanded through the use of external footswitches.

Also think about how much storage you need onboard, and whether you plan to integrate backing tracks you’ve assembled in your DAW – many loopers offer USB connectivity, as well as expandable storage (usually via SD card) to accommodate WAV files from other devices. You can often sync these up to MIDI devices to keep them in time with a click track, too.

There’s also the matter of stereo playback: will you run the looper straight into a PA, or just into a guitar amp? If you opt for the former, you’ll want a looper with dual outputs to provide a more expansive sound.

Even with all these considerations in mind, weigh up how confident you are in your ability to loop: getting your timing right is harder than it sounds, so don’t go straight in at the deep end and get disheartened. You’re better off starting with a simpler unit, then working your way up in your quest for loop mastery.

The best looper pedals you can buy right now

Boss’s most user-friendly offering in its industry-standard Loop Station line boasts a big ol’ 'clock face' dial to help you keep track of how far along your current loop it is, with just a single level control to worry about.

A solitary footswitch handles your play/stop, undo/redo functions, but as you get more experienced, you can add external footswitches for additional functionality.

Stereo inputs and outputs and a whopping 12 minutes of recording time round out the feature set, while your last loop is stored in the pedal even after you turn it off.

An update of sorts to Boss’s venerable RC-30, the feature-packed RC-10R offers the ability to loop and generate rhythms via a built-in drum machine.

Looper-wise, you get six hours of stereo recording time, plus two-track operation and storage for 99 loops, which can be exported to PC/Mac via USB.

280 styles make up the rhythm side of the pedal, with the ability to program two unique song sections, as well as intros/endings and rhythm fills. For solo performers, this could be the band-in-a-box you’ve been waiting for.

The no-nonsense X4 serves up two stereo loops, each with their own footswitch, as well as a dedicated ‘stop’ switch, and an FX switch.

You can use the latter to make a loop stop at the end of its cycle, stop immediately, or even via a fade or cool tape reel-esque slowdown, as well as reverse, or half-/double-speed a loop.

As you’d expect from TC Electronic, the sound quality is impossible to fault, while techier loopheads also get MIDI sync and loop transfer functionality, as well as the ability to configure how overdubs and serial loops record.

Ideal if you want effects and fade-out functionality

The 720 delivers - you guessed it - 720 seconds (aka 12 minutes) of looping, via two footswitches: the left handles looping, overdubbing and undo/redo, while the right starts/stops loops, and deals out nifty reverse or half-speed effects.

You can record 10 independent loops, which can be switched between using an external three-button foot controller - you can also use it as a standalone undo/redo function.

The ease of use makes this EHX effort a winner, as do its silent footswitches and loop fadeout (trails) mode.

The key USP of this triple-footswitched offering is Sync Multi, which allows you to set the length of loop two to be one, two, three, four or six times the length of loop one - for keen loopmasters, this is an absolute boon for more complicated arrangements.

Loops can also be set to run in parallel or series, where one starts when the other stops, which is ideal for verse/chorus song structures.

You can store your loops in nine preset slots, while there are also USB connection and MIDI synchronisation options. This is a loop veteran’s stompbox, and all the better for it.

The RC-300 remains Boss’s flagship Loop Station, and with good reason: its three synchronized tracks with dedicated rec/play/dub and stop footswitches make it the choice of professional loop artists the world over.

There are plenty of other stage-ready features, too: auto-recording (where the pedal automatically starts recording when you start playing), count-in and an expression pedal, which you can assign to a whole host of parameters.

You can even quantize your loops, add effects (including transpose, flanger, phaser, modulator and vocal effects), while there are a wealth of rhythm patterns, too.

Dismiss the ludicrously tiny Wally Plus at your peril: it may be less than half the size of some other compact loopers, but it is positively feature-rammed.

Besides its no-nonsense loop functionality, it can load and save sounds via USB, as well as dynamically change the speed of loops, slowing them down or speeding them up via the onboard tempo knob - music to the ears of more experimental players.

A versatile ‘board loaded with looping feature and beyond

If you must have the most fully featured looper on the market, look no further than this behemoth from HeadRush.

The Looperboard boasts a 7” touch display and quad-core processor, which allows you to customise your looping workflow across the four stereo tracks in any of five track modes (Fixed, Serial, Sync, Serial/Sync and Free).

12 footswitches control the action, with options for time-stretching via tap tempo, reverse, fade, multiply, and the ability to divide length and speed for the whole loop.

Looping on your own is one thing, but keeping your loops in time with a band adds another level of difficulty, which is where TC Electronic steps in with the Ditto Jam X2, which cleverly keeps up with your rhythm section.

The Ditto Jam X2’s built-in or clip-on microphones ‘listen’ to the rhythmic elements of a band and adjust the loop accordingly, without compromising sound quality.

There’s also a practice mode, which allows you to record a loop slowly then speed it up, as well as individual loop and stop footswitches, and rec/dub/play and rec/play/dub functionality.