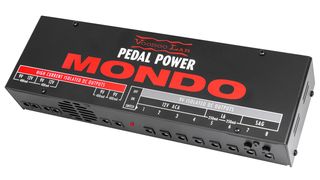 While splashing out on a power supply might not be near the top of your priority list as a guitar player, if you use a lot of pedals, it's going to be some of the most important money you spend on enhancing your rig. While it may be less appealing than exploring a new reverb pedal or a tasty new distortion stompbox, this guide to the best pedalboard power supplies is an essential read for any guitarist who wants to get the best from their effects.

If like most people, you've started out with a cheap and cheerful daisy chain set-up or a generic multi-output adaptor, you may be feeling like now is the time to take the next step. You're probably looking to upgrade to something better equipped for the job and let's face it, your pedalboard is a mess and can do with a proper tidy up. If this scenario sounds painfully familiar, we're here to help.

Check out the best pedalboards you can buy right now
Looking for a new ‘board to house your growing collection of guitar FX and new power supply? We've tested the best options for small to large pedal collections, and for all budgets.

If you've got a larger board, there's only one real option to consider – the Truetone 1 Spot CS12. Particularly if you've got any old-school Digitech pedals that require AC-in, there are literally no other options on the market for that purpose. Meanwhile, the competitive price, voltage switching, and wide range of outputs make the Truetone a flexible, professional-level PSU.

In addition, the fact that current is distributed between all its outputs means in practice you're unlikely to have issues even with lots of high-draw digital pedals on your board. With the introduction of the CS6, there's also now an option for low-profile boards that are affordable and perform just as excellently as their bigger siblings.

For smaller boards with fewer pedals, the Strymon Ojai is another strong contender. With a low-profile option available - whether you've got a Nano or Metro Pedaltrain - there's an Ojai to suit your needs and, when GAS kicks in and you get more pedals, it's easily extendable with extra units, eliminating the need for multiple plugs.

Buying the best pedalboard power supply for you

The main reason for upgrading from a cheaper power supply or wall-wart with daisy chain is reducing noise in your signal chain. Hum or buzz in the chain is almost always as the result of power-line noise. Some will be introduced at the amplifier - for example the infamous heater hum of Marshall's original JCM900 line - but a lot of the noise introduced by pedals can be removed.

Individual pedals, especially distortions and digital delays are likely to have some kind of power-line filtering, but without an isolated power supply - that is, one where each output powers one pedal only, and the power lines do not cross - it's possible to pick up noise from other pedals sharing the same power source.

Another benefit of isolated outputs is knowing that the current delivered to a pedal will be consistent - particularly important with digital pedals. For a non-isolated, parallel or daisy-chain power supply, the supply will be a single mA (milliamp) or A (amp) rating divided between the outputs, whereas an isolated supply will be able to deliver up to the maximum specified on each of its outputs.

Current draw is a major issue. Digital pedals, especially multi-effects or power-hungry DSP platforms like the BOSS DD-500 or Strymon line, require a lot of power to operate. On a smaller power supply or a daisy chain, these pedals might not have enough current to operate properly.

Some older pedals like the Digitech Whammy not only require a whopping 1.3A, where most pedals are rated in mA, but also require AC rather than DC, like most pedals. Luckily, some higher-end power supplies like the Truetone CS12 have your back even in this unusual case.

Common to almost all power supplies is a general assumption that most pedals will draw around 9V of DC, and that they will accept a centre-negative tip on the power lead.

The best pedalboard power supplies you can buy

The most versatile pedalboard power supply around

Surprisingly cheap given the performance on offer, the One Spot Pro range, which consists of the CS7 and CS12, are fully isolated power supplies with a number of nifty features.

On the CS12 there are six 9V outputs from 100mA - 250mA, one 4-9V variable output, two high-draw 9V outputs, and two 18V outputs that can be used for distortions or overdrives that can take 18V for higher headroom.

Uniquely to the CS12, there's also a 9V AC output, which can drive older Whammy and Digitech pedals. Although the rated output is too low for a Whammy, the reality is that a Truetone Pro can deliver up to its maximum current draw, which is the sum of all its outputs, meaning it can flex up if you're not at the maximum for all the other outs.

The Strymon isn’t messing around when it comes to the best pedalboard power supplies. Designed to supply the Strymon line, their default current delivery is a whopping 500mA on every output.

The Ojai in particular has a really interesting USP – a growing pedalboard can be accommodated using the 24V through connector to connect additional Ojai units, without the need for extra plugs to the wall.

In addition, it comes in an R30 variant which is essentially a low-profile version to fit under tighter or smaller boards like the Pedaltrain Nano series.

The best pedalboard power supply for those 'spaceship' size boards

The Voodoo 4x4 has long been the weapon of choice for the guitarist running a number of power-hungry digital effects, as it has four standard outputs, rated at 100mA, as well as four 400mA outputs, with two switchable up to 12V. The Mondo is an even larger version, for players with even more pedals.

Both the 4x4 and the Mondo have a temperature controlled fan to stop the unit overheating in difficult conditions, like a hot festival show or basement gig.

The Mondo as the even bigger brother, has more outputs, features and two additional 'sag' outputs that emulate the reduced headroom and voltage supply of a dying battery.

The Iso-Brick is the isolated version of MXR's diminutive, but expensive non-isolated power supply the DC Brick.

The Iso-Brick's ten outputs are fully isolated, and there's a variety of different current draws on offer to drive even the most hungry digital pedals, as well as two 18V outs for higher-headroom distortions and two variable outputs, which can be used to emulate starved-battery sounds on fuzzes.

The most portable power supply around

The Pedaltrain Volto was revolutionary when it first appeared, being a decent power supply that was both truly portable and rechargeable.

It featured heavily in the excellent Coffee & Riffs location-filmed YouTube series by the pedalmakers behind Old Blood Noise Endeavours, and facilitated a number of their sessions.

The V3 is the latest and greatest in the line, now offering 25 percent greater usage from a single charge when compared to its predecessor.

An excellent option for Nano-style pedalboards

As the name suggests, the Trutone One Spot CS6 is a six-output power supply in the same line as the CS7 and CS12. Like its larger brothers, it can distribute up to its maximum current across all its ports, meaning that usually it has a lot more current on offer than its competitors.

Two of its outputs can be switched up to 12V, and two can be upped to 18V, for extra headroom on drive pedals that support the higher voltage.

What sets apart the CS6 is that it fits under low-profile pedalboards cleanly, unlike the more chunky CS7 and CS12.

Nowadays, most power supplies support high current pedals to some extent, which means that you'll probably only need this as a second supply for a very large touring board. In particular, the Truetone options can deliver up to their max specified current across all outputs, meaning that they tend to have plenty of current spare if they're powering say, drive pedals as well as digital pedals. These sorts of innovations mean that the USP of the Digital isn't as relevant as it once was.

Power your pedalboard via USB

It’s taken a long time for effects pedal power supplies to catch up, but finally, you can power your pedalboard via USB, courtesy of Mission Engineering’s new 529 USB power converter. The supply functions from any USB power cable, as well as a portable USB battery pack, laptop or a car’s USB charging port.

Mission sells its own USB battery pack, designed to fit under a Pedaltrain Nano and offering over eight hours of use. Four isolated 150mA 9V outputs are onboard the 529, as well as a high-current 500mA 9V offering. For smaller ’boards, or setups with only one or two high-current devices, it could prove a convenient solution indeed.

The best pedalboard power supply for versatility on a budget

At a competitive price point, the Mooer Macro Power offers a combination of isolated and non-isolated outputs in a compact package. It has over-current protection, and although there's no specific high-draw output, if you box clever you can simulate one.

The non-isolated outs share 400mA combined, so if you connect 4 pedals to the isolated outs, and then a single high-draw pedal to one of the daisy-chained outputs, it should have more than enough power in the 400mA chain to operate.