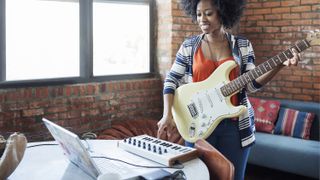 Recording music on a laptop has never been easier. There is all manner of software allowing you to do everything from replicating a guitar amp through to full multi-track sessions with total creative control over recording, mixing and mastering. Even the best budget laptops nowadays possess enough in the way of performance to get you going.

It can be tricky, if you’re new to the entry-level laptop world, to know where to start though. Audio work requires a specific set of features which differ from gaming, for example, or everyday computing. In this guide we’ll point out the things you should prioritise when choosing the best budget laptop for music production, along with offering some recommendations to get you started.

Best budget laptops: what you need to know

What are your budget laptop essentials?
Laptops used with music production in mind tend to focus on three key features; CPU, RAM and storage. Where gamers or video editors prioritise graphical and visual elements, for audio we need only focus on how fast the laptop processes things (CPU), its short-term memory (RAM) and its ability to access data quickly (storage).

The one other essential non-laptop component for music production is a USB audio interface; this effectively outsources the laptop’s sound card and allows you to record electric guitars, microphones and other instruments into the computer, as well as hooking up a pair of studio monitors or headphones to listen back to your work.

What are the non-essentials?
If you’re buying a laptop for general use, with a bit of music production thrown in occasionally, then you will likely have other factors to consider. The size and resolution of the screen, for example, or the battery life. These are all worthy considerations and shouldn’t be discounted, but bear in mind that the more non-negotiable things you have on your wishlist, the higher the cost will be. If the laptop is being bought with music production, and only music production, in mind then you should keep your focus on performance over aesthetics.

Many Windows-based laptops come stuffed with plenty of ‘helpful’ non-essential software and apps – known as ‘bloatware’ – which you’ll want to discard. And, while it might sound strange in an article about music production to tell you to ignore the laptop’s speakers, that’s exactly what we’re going to do. For watching YouTube videos or holding video calls, laptop speakers are fine but for audio and music production they’re not going to give you the results you want. So, while it might sound appealing to have B&O or Beats speakers in your laptop, in reality they aren’t going to have much of an effect on your music production so don’t make them a deal-breaker.

What are the ‘nice to haves’?

As your recording career progresses, you may find you want to add to your studio with extra gear like MIDI keyboards, home studio mixers, drum machines and more. Most kit these days connect to your computer via USB, so you’ll want to ensure you have a decent number of USB ports. Increasingly brands are looking to incorporate USB-C into their gear so look out for these ports where possible too. This is also useful when using an external hard drive, where the combination of USB-C and an external solid-state drive (SSD) makes light work of large audio or sample files.

Another ‘nice to have’ element is the option to upgrade components in the laptop yourself in the future. This won’t be possible on every laptop, but having the ability to chuck in a couple of extra sticks of RAM can have a significant impact on overall performance.

Start small, start clever
Realistically, not everyone can afford the latest Apple MacBook Pro or Dell XPS. Hence, we all have to sometimes make compromises in what we want versus what we can afford. It would be great to have a touch-enabled 4K screen, all-day battery life, plenty of horsepower, and all those other headline features. But we have to cut our cloth accordingly, right?

That’s not to say music production can’t be done on a budget laptop. It absolutely can, as we’ll outline in our recommendations below, but just be aware that certain concessions may have to be made. Start small, before working your way up. This way, when you reach the skill level where you are making 72 track arrangements featuring a symphony orchestra, you’ll know the equipment inside out and have a handle on what’s really important from a music production laptop.

Conclusion
Put simply, a decent laptop for home recording will focus on power, performance and speed above anything else. If you can park those desires for shiny features and other pointless-but-quite-cool elements, you should end up with a machine that will serve you well as you take your first steps into music production. Here’s a round-up of some of the best budget laptops for music production.

The budget laptop for most producers

Taking into account the holy trinity of music production laptop specs – CPU, RAM and storage – the Acer Aspire 5 is a great choice for the vast majority of people on a budget. The Intel i5 processor will chug along nicely, while 8GB of RAM means you can be reasonably expansive with your arrangements.

Adding in a USB-C port means you can take advantage of faster data transfer speeds, although its 512GB SSD is a real bonus at this price point. You’ll struggle to find a better Windows machine for under $500/£500.

Lightweight ultrabook with a stunning screen

Asus certainly knows its way around the laptop market, with its ROG line of gaming laptops proving hugely popular thanks to its relentless pursuit of sheer performance. The Asus VivoBook 15 X512DA continues that lineage but with more of a ‘creative pursuits’ vibe. Indeed, while the Dell XPS range is often seen as the go-to brand for non-Apple fans, we’d point the more discerning user towards the VivoBook range.

The Asus VivoBook 15 X512DA looks amazing, has more than enough in the way of performance to keep up with intermediate-level production tasks, and certainly justifies its inclusion in this list. It might cost more than what you’d normally associate as a budget laptop, but for us the VivoBook is worth pushing the boat out for.

Interest in the Surface line-up gathers pace with each new iteration, but for budget-conscious producers the Microsoft Surface Go 2-in-1 is worth consideration. Admittedly, you’re not going to be crafting extensive compositions on its small touchscreen – the low-end Intel Platinum processor will see to that - and having only one USB port means hubs will be required, but on paper it’s still an impressive proposition.

8GB of RAM on the top-line model, along with a 128GB solid-state drive, means using the Surface Go as a musical sketchpad is a viable option. It comes pre-installed with Windows 10 S, which restricts what apps can be installed, but this can be changed to offer full-fat Windows 10 Home easily in the settings.

The best budget laptop for creating simple beats and patterns

Bit of a curveball, this one. The Samsung 4+ Chromebook won’t run regular digital audio workstations (DAWs) like Ableton Live, Cubase or Pro Tools. It doesn’t have banks of power to draw from. But it does offer a glimpse at what the future might look like for computer-based audio production.

With Chrome OS, you are essentially limited to apps that can be found in Google’s Play Store, or run via a browser – assuming you don’t want to go down the Linux route, that is. On the Play Store there is a slimmed-down version of FL Studio which works a treat, while online you’ll find services like Audiotool and the Spotify-owned Soundtrap which give tech-savvy beatmakers the chance to produce tracks directly through a cloud-based browser interface.

Chromebooks aren’t going to be the first choice of most producers, particularly those recording and working directly with raw audio, but for anyone content to play around with loops and virtual instruments it’s definitely worth investigation.

This 2-in-1 device offers portability and versatility

As one of the bigger names in computing, it’s reasonable to expect HP would have a decent offer in the low-to-mid range. The HP Pavilion x360 fits the bill, serving up a nice set of base specs which would suit anyone learning their craft. The non-music headline comes in the shape of the touchscreen; fold the Pavilion back on itself and it becomes a tablet device.

Realistically, other than as a party piece, the touchscreen doesn’t immediately jump out as being useful to a producer – your mileage may vary – but if the device is going to serve other purposes than music creation then the Pavilion x360 is a sound choice.

The best budget laptop for producers on a super tight budget

Coming in a shade under $400/£400, the Lenovo IdeaPad L340 would make a great first laptop for the budding home recording enthusiast. It comes with a decent amount of RAM – and is upgradeable to add more – along with a solid entry-level CPU, plus a large screen so you can see more of the workflow as it unfolds.

Ideally, for music production, you’d want a solid-state storage drive but the IdeaPad instead opts for a large 1TB HDD. While this is fine for storing finished tracks (and other everyday bits and pieces) you’d do well to make use of the USB-C port to hook up an external SSD if you plan on using sample libraries.

The Dell Inspiron range has been the first laptop many bedroom producers use to start them on their recording journey. Packing in some respectable spec, and the peace of mind that comes from using a trusted brand like Dell, the Inspiron range is definitely worth a look.

The model we’ve opted for features 8GB of RAM, which can be upgraded in the future quite easily, and a dual storage method that provides 1TB of HDD storage with 128GB of solid-state offering the best of both worlds. We’d have liked a USB-C port, as that’s the way the world’s going, and the Intel i3 isn’t what you’d call a powerhouse, but you can’t go far wrong with the Inspiron.

We’ll end the list on something aspirational. Just shy of $600/£600 may seem excessive for a ‘budget’ laptop, and it’s something we’re aware of, but we’re of a mind to keep it here simply because it’s worth highlighting the jump in overall performance capability you get when you wander north of this price bracket.

The HP 15-ef0023dx (laptop brands have the worst product naming conventions) offers 12GB of RAM, making it ideal for large arrangements or tracks using a lot of recorded audio. It has a speedy solid-state drive for accessing files, and the Ryzen 5 CPU performs consistently well under testing. Yes, it costs a bit more, but the increased spec means it could end up serving you far longer than some of the other cheaper models on test today.