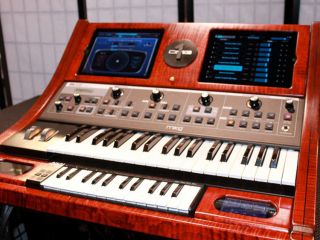 It's the second day of the world's biggest music making trade event and the MusicRadar NAMM news feed is running overdrive!

Roland kicks things off with an impressive array of keys, ekits and pedals, while the likes of Blackstar, Peavey and Mesa have more than delivered on the amp front.

Video wise, we've been up close at Steinberg's grand Cubase 6 unveiling and had the pleasure of chatting to legendary rock producer Andy Johns about, among other things, his involvement with the new Albion Amplification venture.

Oh, and if you're wondering what that red monsterabove is, it's a collaboration between Spectrasonics and the Bob Moog Foundation called the OMG-1. 'Oh My God', indeed…