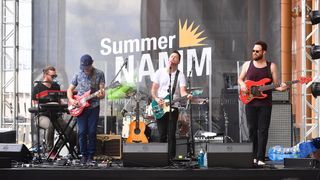 You’ve probably heard of the NAMM Show - the trade-only musical instrument event that covers guitars, hi-tech gear, drums and more and takes place in Anaheim, California every January - but what you might not know is that its sister event, Summer NAMM, lands in Nashville every July.

With Summer NAMM 2019 almost upon us, here’s a rundown of what you need to know.

When is Summer NAMM?

Who is exhibiting at Summer NAMM?

Summer NAMM has a reputation for being a guitar-orientated show, so it comes as no surprise to see that the likes of Gibson, Fender, Marshall and VOX are on the exhibitor list. There are some notable absentees, though - neither PRS or Ibanez are attending, for example.

The hi-tech music industry is represented, too, with Korg, PreSonus, Casio and IK Multimedia all taking booths.

Which products will be released at Summer NAMM?

The Summer NAMM rumour mill hasn’t produced a great deal thus far, but we do know that Supro will be reissuing the Ozark electric guitar and Grez Guitars will be unveiling The Folsom, its first solidbody model. Janktone’s Jankenstein humbucker pickup could be a headline-grabber, too.

Away from the show, there’s a chance that PRS could attempt to steal some thunder by launching a more affordable John Mayer Silver Sky model.

The hi-tech picture is looking even more blurry. Korg has announced products at the show in the past, as has PreSonus, but we’re not expecting any major tech launches at Summer NAMM. You never know, though…

Who can attend Summer NAMM?

As well as NAMM members, Summer NAMM can be attended by professionals in the audio, sound and entertainment industries. However, although it’s primarily a trade-only event, musicians, songwriters and general enthusiasts can attend The Make Music Experience, which takes place on Saturday 20 July. Tickets cost $10 in advance or $20 on the door.

Where can I read Summer NAMM news stories?

On MusicRadar, of course. Check out our feed of NAMM stories to stay up to date with everything that’s going on.