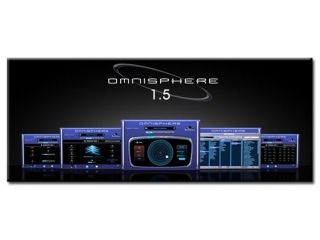 Version 1.5 includes a wealth of new features and additions to the synthesis engine and user interface, the most prominent being the inclusion of a fantastic new interactive interface called "The Orb" which delivers real-time synthesis manipulation capabilities.

The update also includes many features that have been requested by users since Omnisphere's release back in 2009 including the new 5-Column Browser view and support for polyphonic aftertouch. The new version also integrates a significant update to the factory patch library, taking advantage of all the new sound design capabilities and bringing the total number of included sounds to a whopping 8,000!

Eric Persing, the Founder and Creative Director of Spectrasonics said: "Our goal for Omnisphere has always been to make it the 'best of both worlds' - awesome sounds AND a dream instrument for sound design. As longtime synth geeks ourselves, we are just as excited as our customers to see how Omnisphere is growing and evolving as a synthesis platform. We're really looking forward to hearing how our users explore the new sonic worlds this version opens up. I think it's some of our best work yet."

Omnisphere 1.5 is set to be released on February 15th, 2011 and will be available to download free for all registered users.

Omnisphere 1.5 includes new and expanded synthesis capabilities, with newly designed "zoom" interface views for the synthesizer's Harmonia, Waveshaper and Granular synthesis areas. Harmonia can create extremely rich sounds by adding up to 10 oscillators per patch with new independent modulation possibilities on each oscillator. The Waveshaper now includes more extreme sound mangling capabilities with the new polyphonic "Crusher" and "Reducer" modules, which include 'Animation' and 'Force' parameters that can all be modulated. Omnisphere's Granular synthesis area has been made significantly more powerful by including new 'Speed' and 'Position' modes, which create dramatic polyphonic shifts through the audio and time spectrums. At the centrer of the Granular Zoom interface is a new real-time 'Granular Visualizer' showing a colourful graphic model of the effect of parameter edits, all of which makes Omnisphere's complex Granular synthesis easier to understand and more fun to use.

The innovative "Orb" feature of Omnisphere 1.5 is both a "remarkable" sound manipulation tool and an intuitive performance interface - it can be thought of as a 'circular controller.' Now with a single click of the mouse, the user can instantly customize the sound. Best of all, the Orb automatically works with every patch a user has, there's no setup necessary.

The user simply moves the Orb cursor with a mouse, a MIDI controller or in the case of an iPad, with fingers directly on the Orb itself. As the Orb moves around the concentric circles, it morphs between automatically generated parameter scenes in Omnisphere's STEAM engine in a highly intelligent and musical manner - all patch dependent - manipulating the sound in subtle or radical ways appropriate to that particular patch. If the user doesn't like what the Orb has created, a complete new set of manipulations can be chosen by simply rolling the "Dice" button, which instantly creates a brand new group of intelligent sonic modifications and effects to try. There's no limit to how many serendipitous sonic variations the "Dice" can create - opening up the vast power of the STEAM engine to every user, regardless of synthesis knowledge.

For advanced synthesists seeking maximum flexibility, the Orb can also be setup manually and used as a new modulation source in Omnisphere's sophisticated Mod Matrix.

The Inertia slider of the Orb allows the user to create a 'movement trail' after letting go of the Orb, just like a ball might roll and bounce off the walls of a circular enclosure, adding a musical symmetry to the "performance" of an Orb interaction. Users can also Record their performance movements directly into the Orb and play the performance back in sync with their controller or host. The Orb's movements and sonic results are saved within the patch, multi or the host's session for later recall. The movement of the Orb can also be automated in the users host.

The ideal control surface for Omnisphere's new 'Orb' is the multi-touch interface of the simultaneously announced "Omni TR" iPad app, but the Orb can also be used with standard mice, trackpads and MIDI controllers.

Omnisphere 1.5 includes support for Spectrasonics new "Omni TR" iPad app, which provides wireless multi-touch performance control over the synthesizer. Alternate controllers that send multiple simultaneous MIDI channels have improved handling with the new "Clone Part" feature, making it easier to edit with multichannel systems like Guitar synths and the Eigenharp controller. Omnisphere 1.5 also adds support for MIDI keyboards and devices that send polyphonic aftertouch. A special new MIDI Learn mode enables hardware controllers that send a single channel to have all of their learned knobs, sliders and switches affect any parts currently selected in Live Mode - making Omnisphere even more intuitive when controlled from a hardware synth such as a Moog Little Phatty.