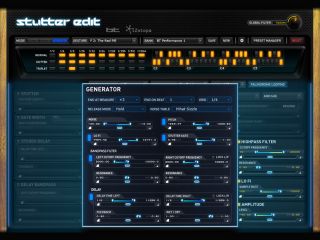 Edit slices audio into small fragments and sequences the pieces into razor-sharp rhythmic effects, recreating techniques that once took hours to perfect in the studio. Results can range from jarring to subtle: a melody can be disintegrated into a syncopated rhythmic roll, or a drum hit can be transformed into an arpeggiated scale of pitches.

The complex set of tools in Stutter Edit is balanced by an elegant MIDI control scheme, which makes adding effects a completely intuitive process - much like playing an instrument.

In addition to these trademark stutter effects, performers and producers can juggle between a multitude of rhythmic effects including gate, pan, digital distortion, delays and filters. The Generator module creates custom noise sweeps that can be triggered along with stutter effects to build tension and create dynamics, both in live performances and studio arrangements.

"Stutter Edit exists because I wanted to step on stage with a laptop and improvise the complex and musical rhythmic effects that sometimes took me days of trial and error to create," explains BT. "I'm elated to partner with iZotope and unveil Stutter Edit to the world, and I can't wait to see what other producers, composers and sound designers will do with this insane new effect. I truly believe this will dramatically change the topography and scope of what is possible with live sound design and remixing.

On the stage, Stutter Edit makes it simple for laptop performers to create improvised remixes that include incredible stutters, fills and build-ups. Stutter Edit's MIDI-controlled workflow is a perfect complement to performers using Ableton Live for DJ sets.

In the studio, musicians can utilise Stutter Edit to add color and transitions to recordings, making arranging with effects all about intuition instead of trial and error.

BT is widely recognized for pioneering the "stutter edit" as a musical technique. He originally designed the Stutter Edit software to help automate his painstaking process for breaking audio into impossibly small fragments and using them for new sound synthesis.

Transeau has used various early versions of the Stutter Edit software both in his studio and in live performances for years, but until today these tools have not been available to the public.

BT's Sonik Architects software company was recently acquired by iZotope Inc., who built the technology into a complete product compatible with both PC and Mac OS X platforms and major music production and performance hosts.