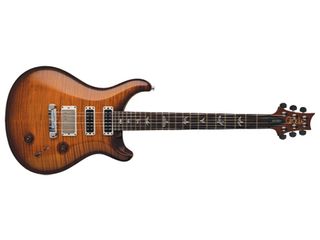 NAMM 2011 PRESS RELEASE: PRS's new 22 fret, 25" scale length Studio model electric guitar is a fresh, modern rendition of a traditional single-single-hum guitar set up with the beauty and brightness of a maple top.

The possibilities are vast with PRS's proprietary 57/08 Narrowfield pickups in the middle and bass positions in conjunction with a 57/08 humbucking bridge pickup. Screaming lead tones, crisp rhythm tones and a redesigned 5-way blade switch also enhance the flexibility of this guitar in the studio or on stage.