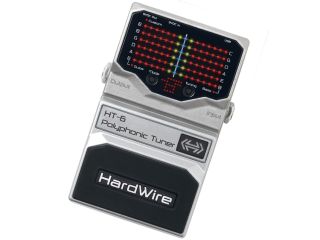 NAMM 2011 PRESS RELEASE: HardWire®, a leading manufacturer of guitar pedals, introduces the new HT-6 Polyphonic Tuner. The HT-6 is a guitar tuner for guitarists and bassists that can be used to tune all 6 strings of an instrument simultaneously.

Based on technology from 3dB Research, the HT-6 makes tuning instruments faster and easier by simply strumming all strings and viewing the 'string' display readout as to which string is in or out of tune.

The HT-6 Polyphonic Tuner pedal interface is similar to chromatic tuning pedals, but features standard effects pedal, 6rows of LED lights (one for each string) and an LED display matrix that represents the six strings of a guitar or bass. Two buttons on the HT-6 Tuner's top display panel are used for selecting display modes (Mode) and tuning references (Tuning).

The HT-6 also features individual guitar and bass LEDs to indicate whether guitar or bass display modes are being used. The Custom LED will light when Drop D tuning reference is selected. There is a cluster of LEDs below the matrix that is used to display the note as individual strings are tuned.

"The already impressive lineup of HardWire pedals just got even better with the introduction of the HT-6 Polyphonic Tuner. The tuning capability of the HT-6 is a great addition to a tour-worthy package of the HardWire pedals," stated Rob Urry, president, Harman Music Group.

Each HardWire pedal also features an assortment of tour-worthy accessories, including green gaffer tape common to pro pedalboards, and a precut hook and loop pad to mount the pedal to a pedalboard.

The HardWire HT-6 Polyphonic Tuner is expected to ship in March 2011 with an estimated price of £99 RRP inc VAT (pricing may be subject to change).