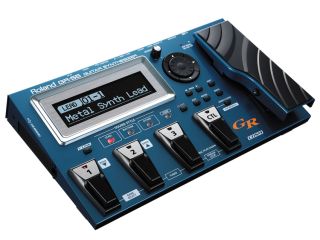 The GR-55 is the pinnacle of Roland's exhaustive efforts in the field of guitar synthesis over the last 35 years. In 1977, the company created the GR-500, the world's first guitar synthesizer. This milestone product ushered in a new era of guitar expression, allowing guitarists to play an entire palette of sounds that were previously available only to keyboard players. Since then, Roland has remained steadfastly dedicated to guitar synthesis, constantly developing and improving the technology to make it accessible and easy to use for all guitarists.

The GR-55 allows players to combine all three sound engines, plus their guitar's normal input, to create any sound from the familiar to the original. An independent multi-effects processor is available for a huge array of tone-shaping options, plus global reverb, chorus, delay effects and EQ to add final sweetening to any sound.

The GR-55 puts guitarists instantly in touch with a huge library of amazing sounds, with no editing required. The onboard lineup of ready-to-use presets takes the pain out of the process, from pop to rock and beyond, with quick-access category buttons. Creating and editing sounds is a breeze for guitarists as well, thanks to a large LCD display, simple front panel, and the intuitive EZ Edit and Sound Style features. Also, onboard is a phrase looper that lets players capture on-the-fly recordings with unlimited sound-on-sound style overdubs.

The GR-55 also features a USB song player that lets users play WAV files stored on USB flash memory, and song playback can be controlled with the onboard pedals. The GR-55 also functions as an audio/MIDI interface for computers, with a rear-panel USB 2.0 port for a quick and easy connection. Users can easily integrate with their favorite digital audio workstation software, recording GR-55 sounds as audio in the DAW and using the GR-55's super-fast pitch-to-MIDI capabilities to trigger MIDI sounds such as virtual synths and samplers with their guitar.

The GR-55 is equipped with Roland's industry-standard 13-pin GK interface. It is possible to use a GR-55 as an effect processor for a non-GK equipped guitar, but to access the GR-55's enormous palette of sounds, guitarists must use an instrument equipped with a GK-compatible pickup, such as Roland's GK-3 Divided Pickup. The GK-3 can be easily installed on most steel string guitars with no modification to the instrument. In addition, many different GK-ready instruments are commercially available from various top guitar manufacturers.