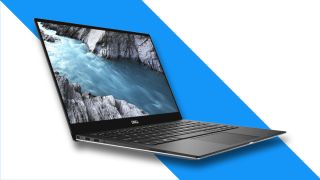 Music producers today have never had it so good. With modern laptops now boasting the kinds of performance once the preserve of high-end desktop PCs, producers and performers can now effectively pack their entire studio into a bag and take it wherever their heart desires.

Apple has traditionally led the way with creative-focused laptops, with its MacBook Pro line-up having had the market cornered for a while. That is changing though, with Windows-based systems now proving more than capable as an alternative. Leading the charge is the Dell XPS range, which rubbishes the notion that Apple has the monopoly on slick design. But are they as geared towards music production as a MacBook? Let’s take a look at the evidence.

If it’s a Windows-based system you’re looking for, it can be tricky to identify what the right laptop for you will be. With Apple it’s simple, right? You either want the big 16” MacBook Pro, or you want the small MacBook Pro. But with Windows systems there are multiple brands vying for your hard-earned dollar.

Fundamentally, however, there are more similarities than differences. Because the operating system, Windows 10, is the same, the actual user experience will largely be the same. Differences will come in areas like screen size/resolution, battery life, keyboards, trackpads and connectivity. That’s before we get into the internals like memory and storage. Let’s break it down.

For music and audio production, you are predominantly looking for three things – processor speed, memory and storage. You’ll have your own wish list of requirements on top of that; if you’re on the move a lot then battery life will be important, or a decent screen if you edit video, for example. But as a music production-capable rig, focus on the three things mentioned there. Digital audio workstations (DAWs) are notoriously power-hungry, and buying an underpowered laptop can seriously affect your ability to work, so don’t skimp at this stage.

Thankfully, the Dell XPS range contains some very capable, powerful laptops which can cope admirably with music production work. Where things become interesting, and different to the MacBook Pro range, is in the option of having the Dell XPS as a 2-in-1. This adds in a touchscreen, and effectively bridges the gap between laptop and tablet device. Imagine having a full Ableton Live session which you can tweak and manipulate with your fingers; it may seem gimmicky but, having tried it ourselves, we can certainly see how this could be an interesting way to work.

Clearly there is the issue of budget. Whichever way you look at it, decent spec laptops are not cheap, so it’s important you choose wisely. That said, consider how much you will actually use the device. If you, like us, spend a large amount of time working, writing, recording and producing, then it makes sense to invest in a machine that will serve your needs well. With that in mind, let’s take a look at some of the options available to you in the Dell XPS line-up.

The Dell XPS range comes in four main variations. Essentially, you have a choice between a 13” screen or a 15” screen, and whether you want a standard laptop or a 2-in-1 version. Within that there are options according to performance and power, ranging from lightweight entry-level versions right the way up to workhorse, pro-grade systems.

The recently-announced Dell XPS 13 (2020) is of particular note here. Enhancements here include a new 16:10 screen ratio which is a real head-turner, and larger trackpad. Internally there aren’t many notable differences from its predecessor, but that’s coming from an already high bar. Put simply, this is still the lightweight Windows laptop to beat. One caveat to that comes in the baffling decision to include a meagre 4GB RAM in the entry-level version; for music and audio production work this is frankly nuts, and we’d advise staying away from that one.

Where the Dell range differs from Apple is in the sheer number of configurations available to you. While to some this may seem daunting, to others its this flexibility which appeals. Somewhere within that line-up sits potentially the exact balance of price, power and performance you are looking for. Here are our recommendations from the Dell XPS range.

Dell XPS 13 2019 (Intel i7, 16GB RAM, 512GB SSD)
As far as lightweight, small, portable laptops go, this is a strong choice for musicians and producers. The Dell XPS 13 we’ve chosen comes equipped with a 10th generation Intel Core i7 processor, capable of up to 4.90GHz, which will ensure snappy responses, faster renders and the ability to run numerous VST plugins and instruments simultaneously. We’ve opted for 16GB RAM to ensure larger multitrack sessions can run without any problems, while the included 512GB SSD will mean you can store large sample libraries on the laptop itself should you need to.

At this specification, the Dell XPS 13 will cost £1,299/$1,329, which is certainly competitive when compared to other brands. For an extra £320/$300 you can upgrade the screen to a 4K multi-touch version too, if preferred.

Dell XPS 15 2019 (Intel i9, 32GB RAM, 2TB SSD)
For the larger of the two models, we’ve opted for a real powerhouse. The Dell XPS 15 we identified packs a real punch. The Intel Core i9 processor laughs in the face of huge DAW projects, and will ensure operations are quick and responsive no matter how many tracks you’re running. A hefty 32GB RAM is perfect for the most demanding sessions, while 2TB of solid-state storage gives you a lot of space to fill.

Admittedly, performance like this will cost you. At this specification, you’re looking at an outlay of £2,449/$2,699, but realistically the XPS can act as the centrepiece of a studio for years to come.

The obvious contender, as an alternative to the Dell XPS, comes in the shape of the Apple MacBook Pro. Both machines come with similar specifications, and the right version of either will happily meet the needs of most producers and musicians. That said, the Apple devices do tend to have a slightly higher cost, so if price alone is your key driver then the MacBook Pro might not be the machine for you.

Another avenue might be to look into gaming laptops. While their garish aesthetics might not appeal, the performance these machines tend to offer is certainly of use to music producers. The ASUS ROG STRIX G731GU, for example, delivers similar specifications to the Dell XPS we identified, and runs on Windows 10. Gaming machines also tend to be user upgradable too, unlike the XPS and MacBooks, so you can happily boost its performance in the future should you need to.