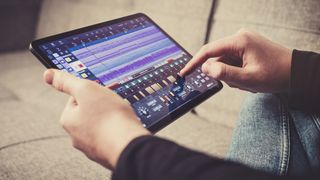 An iPad might not be an essential purchase for a musician, but it’s certainly a pretty desirable one. With the right music-making apps, you can use Apple’s tablet as a portable recording studio - there are plenty of mobile DAWs and you can even use plugins these days - synth, groovebox, effects unit, DJing platform and more.

What's more, an iPad can make a great place to display setlists and sheet music during a gig, or it can be a great time-killer during downtime in the studio, enabling you to stream movies, play games and surf the web when you're not needed behind the glass.

With the range in constant flux, finding the best iPad for music-makers can be tricky. So, we’re here to guide you in your search.

We’ve assessed all the iPads in Apple’s current line-up, discussing the pros and cons of each. So, whatever your budget or requirements, you’ll know which model you should buy.

What is the best iPad for musicians?

For the best balance between price, power and portability, we’d say that the current best iPad for music makers is the iPad Air. Yes, it’s not quite as powerful as the Pro models, and lacks some of their bells and whistles, but its 10.5-inch display gives you plenty of room to work with, and it also has the advantage of being incredibly light.

What’s more, with prices starting at $499/£479, it’s far more affordable than the iPad Pros, which cost as much as your might spend on a laptop.

Taking all this into account, the iPad Air weighs in as the best iPad for musicians who are going to use it as a second device to operate alongside their main studio computer. However, if you want to switch completely to iPad music production - not such an outlandish thought these days, especially now that there's plugin support on iOS - we can see an argument for buying the 12.9-inch iPad Pro, which is as close as you'll get to a laptop replacement in a tablet.

How to buy the best iPad for you

To the casual observer, all of Apple’s iPads might look pretty similar, but there are some crucial differences. The most obvious physical one is size: the iPad Mini is the smallest, rocking a 7.9-inch display, while the 12.9-inch iPad Pro gives you the largest display. The other models in the range all fall somewhere between these two extremes.

Then there’s the issue of power: it probably won’t surprise you to learn that each iPad has a different chipset. The standard iPad - note the lack of the word Mini, Air or Pro in its name - is the least powerful of Apple’s tablets, while, again, it’s the 12.9-inch iPad Pro that gives you the most grunt.

Music-making apps can be pretty demanding, particularly if you’re running two or more at the same time, and a faster processor will give you better performance.

You also need to think about onboard storage. iPads don’t accept memory cards, so what you buy is what you’re stuck with. Some of the best music-making apps - like Moog Model D for iOS, Korg Gadget 2 and Nanostudio 2 - take up multiple gigabytes of space, so don’t scrimp in this area.

The final and possibly most important consideration, though, is price. Buying the biggest, most powerful, most capacious iPad will cost you serious money, so for most of us, it’s about finding the best balance between features and affordability.

The best iPads for producers and musicians today

The cheapest ‘full-size’ iPad you can buy

Apple recently upped the size of its standard ‘full-size’ iPad: it now has a 10.2-inch Retina display rather than a 9.7-inch one. It also trumps its predecessor by offering support for the Apple Pencil and full-size Smart Keyboard, though it’s debatable how many music makers will care about this.

The downside here is the processor: the aging A10 Fusion chip. This dates back to 2016 and is the same as you got in the previous iPad. On the plus side, the inclusion of a Lightning port means easy connectivity to a slew of music-making peripherals.

This isn’t a bad iPad, and it’s worth considering if your budget is tight, but there are better options if you spend a bit more.

Buy the Apple iPad from Amazon

The best iPad if portability is your main concern

The clue’s in the name with this one. The iPad Mini is Apple’s smallest tablet and, as such, the model to go for if a compact form factor is important to you. It’s no slouch, either, toting an A12 processor (the same as you’ll find in the iPad Air).

It’s worth asking, though, if a 7.9-inch display is really the best option for music makers. If you’re dealing with a lot of onscreen controls, as you are with most music-making apps, then it’s good to have as much space for them as possible.

You do get plenty of bang for your buck with the iPad Mini, though - just make sure you try before you buy so you can make a judgement on that smaller screen.

The best iPad for music makers

If you’re worried that the iPad Air falls between two stools - not as good as the Pro model; not as affordable as the standard iPad - allow us to set your mind at rest. It turns out that this lightweight Apple tablet hits a real sweet spot, offering a great balance between price and performance.

The 10.5-inch Retina display features Apple’s True Tone technology and an antireflective coating, while the dramatically named A12 Bionic processor should give you plenty of grunt. What’s more, this is the lightest ‘full-size’ iPad around, weighing in at a mere 456 grams (1 pound). As such, it’s a great all-rounder.

Top-of-the-range performance in a compact frame

The 2020 iPad Pro is here and, predictably enough, is said to deliver the highest performance yet seen in an iPad. Inside you’ll find the new eight-core A12Z Bionic chip; there’s also an edge-to-edge Liquid Retina display, while the built-in LiDAR scanner is designed to enhance the AR experience.

On the audio side, we’re told that the iPad Pro now has five “studio-quality” mics built into it and comes with four-speaker audio. With storage options of up to 1TB, meanwhile, you're unlikely to run out of space.

The price is an issue, of course, but if you can stomach that, you're very unlikely to be disappointed.

With pretty much the same specs as the 11-inch model, the big daddy of the iPad family is once again a portable powerhouse, but with a slightly bigger display.

Though that does limit its portability ever so slightly, this does mean that it can lay more claim to being the laptop replacement that Apple thinks it is, particularly if you pair it with the new Magic Keyboard, which now includes a trackpad. Yes, that will incur an extra cost - $/£349 to be precise - but if you're willing to spend this much on a tablet (albeit a very powerful one), then that might not bother you.