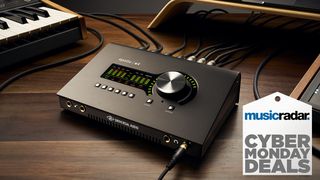 While it may feel like the Black Friday/Cyber Monday deals bonanza is drawing to a close, many retailers and manufacturers are still coming out with new deals every day, so there's still time to grab a bargain, or two.

Whether you are in need of new software plugins, guitars, electronic drum sets, or synths we have something for you. However, now it is the humble audio interface's turn.

We've scoured the web to find the biggest bargains and have come up with what feel are the top five deals on audio interfaces for Cyber Monday.

Behringer UM2 audio interface: $29
Kickstart you home recording set up for less than $30 with this compact and capable audio interface that's ideal for recording keys, guitars and vocals.View Deal

Focusrite Scarlett 2i2 3rd Gen: $159.99
Save $40 on this USB audio interface and claim a further $60 cashback when purchasing this item with a pair of Adam Audio T5Vs at Sweetwater.View Deal

IK Multimedia Axe I/O: $249.99
A two-in/five-out audio/MIDI interface capable of up to 24-bit/192kHz resolution, the AXE I/O features all the usual input and monitoring options but also sports a guitar input. View Deal

Focusrite Clarett 4Pre USB 18-in 8-out: $499.99
Clarett 4Pre USB is an 18-in, 8-out audio interface with four mic/line inputs and the ADAT input supports an additional eight channels when combined with multi-channel mic preamps like the Clarett OctoPre. Outs include two monitor outputs, two line outputs and two headphone outputs with volume controls. MIDI I/O and S/PDIF I/O are also included.View Deal