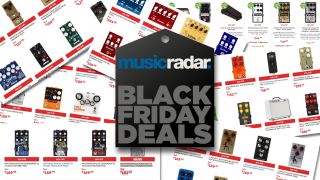 If you’ve been waiting until Black Friday to load up your pedalboard with new effects, then your delay strategy might just have worked with the news that Sweetwater has just dropped 15% off a massive range of pedals from big name brands.

This is one of the best Black Friday guitar deals we’ve seen so far and could be your chance overhaul your sound for less.

Deals range from the excellent Bognor Oxford fuzz down to just $99.99, and almost $35 off the awesome Keeley D&M Drive. But this is just the tip of the iceberg, with over 100 pedals to choose from. Right now we’ve got our eyes on the ace deals on these top-rated pedals:

Get 15% off select Wampler effects
Make savings on everything from the Tumnus Transparent overdrive to the Faux Tape Echo V2 delay. Click to explore the full range of discounted pedals.View Deal

Save $34.50 on the Diezel VH4
You want distortion? You got it! Get wide ranging controls for gain, treble, middle and bass, plus presence, deep and master controls to help you shape the low-end and mid-range bite.View Deal

Save 15% on a range of Matthews Effects
There are five Matthews pedals up for grabs in the Sweetwater sale, including the Astronomer V2 Celestial reverb, Whaler V2 Fuzz and Chemist V2 Atomic Modulator.View Deal

Save 15% on Bogner effects
Bognor pedals don't come cheap, but if you've had your eye on one, now could be the time to strike with big money to be saved on drive, fuzz and compressor pedals.View Deal

Save 15% on J. Rockett effects and power supplies
J. Rockett is offering the biggest selection of all the brands here, with prices ranging from $67.15 for the Audio Design power distributor up to $211.65 for the Tim Pierce signature overdrive.View Deal

Save 15% off JHS pedals
You don't need much cash to take advantage of the massive JHS discounts. $29.75 will score you a funky red foot switch, while $46.75 will get you a killer kill switch.View Deal

Save 15% on Keeley pedals
Robert Keeley's handcrafted American pedals are widely regarded, so any opportunity to get money off a D&M Drive, a Dark Side Workstation or any of the other pedalboard powerhouses featured is a good deal.View Deal