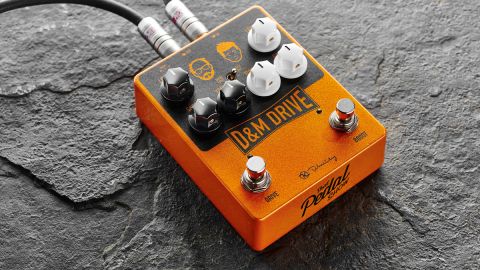 Stick one of these between your guitar and amp and you won’t be disappointed.

Many of you will be familiar with That Pedal Show on YouTube in which former Guitarist editor Mick Taylor and TheGigRig’s Daniel Steinhardt play through a bunch of stompboxes and wax lyrical about them.

Now the duo have their own signature pedal with Keeley Electronics, a dual-format design featuring overdrive and boost sections that can be used individually or stacked - with the option of putting the boost before or after the drive.

Extra flexibility comes from input and output jacks that will take TRS cables to allow the two circuits to be split, so each can be used in a different loop of a switching system, effectively having two standalone pedals.

Mick’s contribution is the Boost section, and as he likes his Tube Screamers and Klons, there’s more than a hint of that in how this gets more out of your amp. For starters, there’s emphasised midrange with a frisson of frequencies that add more authority to the sound of single coils, sounding great on our Strat and with P-90s.

There’s plenty of headroom here to push your amp and you can dial a little low-level overdrive with the Gain knob. It’s an excellent resource for enhancing a clean amp, but can also give a kick to an already-driven amp.

The Drive section was specified by Daniel to offer a bit more drive than his favourite Analog Man King Of Tone. It can go from low-level gritty raunch to the throaty sound of a full-on driven amp with all of the sustain and rich harmonics that entails. There’s plenty of presence in the sound and the Tone knobs focus that top-end to suit your rig.

Stacking the two sections together offers more opportunity - both routing options have their relative merits, but we really like the way that the Boost before the Drive ups the saturation quota.

With functionality and sound conjured up by a pair whose collective knowledge about how pedals work in front of an amp is comprehensive to say the least, the D&M Drive has turned out to be a real gem among dual overdrive pedals, each side being sufficiently individual to give you quite different tonal options, while complementing the other perfectly.