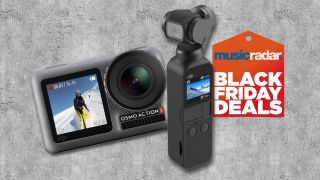 If you’ve set your sights on sharing more of your playing, gigs or awesome opinions on music with the world in 2020, then you’re going to need some decent gear, including a quality vlogging camera.

While it could be very easy to spend excessive amounts of cash, you actually don’t need to break the bank to shoot slick, quality footage, whether you’re filming a guitar lesson, capturing a DJ set or recording a drum cover at home.

Drone giants DJI know a thing or two about photography tech, and they have a couple of capable and affordable vlogging cameras in their range which are enjoying heavy discounts right now in the DJI Winter Holiday Sale.

The compact DJI Osmo Pocket featured in our round-up of the best vlogging cameras for musicians. It’s a handheld 4K Ultra HD camera that boasts built-in 3-axis gimbal stabilisation, helping you produce buttery smooth, cinematic footage. It could be the ideal tool for shooting your next music video. The Osmo pocket usually sells for £329. Right now you can pick one up for just £279, with an Osmo Pocket Extension Rod thrown in for free (it usually costs £69).

The DJI Osmo Action is an unbelievable and easy to use piece of kit – it practically stole the crown right off the GoPro Hero7 action camera’s head. In addition to its ability to shoot vivid 4K HDR video, incredible digital stabilisation technology (known as RockSteady) and 11 metre waterproofing for those beer-soaked gigs, the jewel in the Osmo Action’s crown is the additional front-facing colour screen, helping you to frame your shots more easily – this is a game changer for vloggers who want a simple, functional setup. You can snap one up right now for just £249. That’s £80 off the original price.

Looking for more great Black Friday music deals? We’ll be sharing the best offers and savings on everything from guitars and drums to plugins, right here on MusicRadar.

DJI Osmo Pocket + free Extension Rod | Was £398, now £279
If you’re a vlogger or traveling musician, the Osmo Pocket is an easy way to document your exploits. It’s compact, easy to use and produces super smooth footage. Order today and you’ll get a free extension rod thrown in.View Deal

DJI Osmo Action | Was £329, now £249. Save £80!
It might be an action camera, but it's definitely not just for extreme athletes. The front-facing camera makes the Osmo Action a great option for musicians wanting to capture their playing. It’s small enough to chuck in the guitar case or backpack without taking up valuable space, too.View Deal