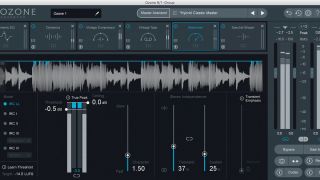 iZotope has fired the starting pistol on its Black Friday sale, and what a sale it is.

Elsewhere, the Creative Suite 2 is half price at $249. This includes VocalSynth 2, Iris 2, Trash 2 Expanded, BreakTweaker Expanded, Stutter Edit, DDLY, and Mobius Filter. A real galaxy of software stars, in other words.

If you want the Advanced versions of Ozone 8 and Neutron 2 you can have them in the 08N2 bundle for $349, which is half price. The Nectar 3 vocal processing software, meanwhile, has had its price trimmed from $249 to $199.

Finally, there’s the big daddy: Music Production Suite 2. Containing more than 30 plugins, this is available for $599, which is 40% down from the regular price of $999.

Browse all the deals and grab yourself a bargain on the iZotope website.

Looking for more great deals on software and plugins? With Black Friday 2019 and Cyber Monday fast approaching, it could be worth waiting to see what the best Black Friday plugin deals deliver.