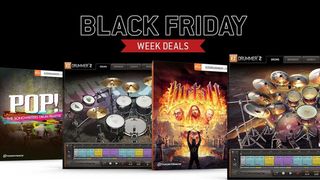 Here on MusicRadar, in the build up to Black Friday and Cyber Monday, and throughout the Holiday season, we'll be bringing you the best deals on software developers of all kinds for musicians, drummers, guitarists and producers. Click here for all the best Black Friday/Cyber Monday software deals.

Toontrack has been dropping deals all week in the run up to Black Friday and the big day has arrived with even better reductions than before.

To coincide with this hefty offer, there’s also a 61% off reduction on EZmix packs, including the Colin Richardson pack, which just happens to coincide with Toontrack’s annual Metal Month event.

And it’s not just about EZmix either; the Metal Foundry SDX pack of Superior Drummer has been slashed to just €52 from €159, a discount of 67%.

Toontrack will be adding new deals throughout the week, so be sure to keep on them as the week progresses. For more details, check out the Toontrack Black Friday deals page now.

Toontrack EZkeys String Machine - 80% off
The String Machine sound library is based around a meticulously sampled mid-seventies Solina String Ensemble synthesizer and is down to just €28 for Black Friday.View Deal

Toontrack Metal EZX! - 75% off
The Metal! EZX is based on a new drum recording engineered by Daniel Bergstrand in Norway’s highly unique Tanken Studio and can  now be yours for just €17.View Deal

Toontrack Pop! EZX - 75% off
The Pop! EZX comes with a collection of ten mixed and matched drum kits delicately intertwined with custom percussion pieces. and can now be yours for just €17.View Deal

Toontrack EZmix 2 is now 73% off with selected packs reduced by 61%
Toontrack has released a bunch of deals in the lead up to Black Friday, kicking off with this very tempting offer on EZmix 2, which is now down to €38 from €139 until 27 November 2018 – that’s a massive 73% off.View Deal