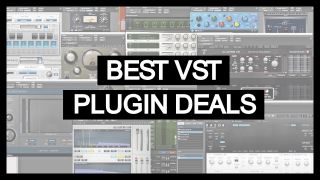 Plugins are essential tools for anyone recording music using a computer, whether you're making a budget band demo at home, or mixing an album for a Grammy-winning artist.

With so much choice for music makers and producers it can be difficult to know where best to spend your money. The great news is that companies including Plugin Boutique, Waves, Toontrack and Native Instruments regularly host sales on their software, giving you every excuse to load your hard drive with new music-making tools and experiment with more obscure options.

This page is the best place to find the latest and best deals on plugins, DAWs, software and apps. We're constantly scanning the web for the best deals and sharing the best offers right here.

Plugin deals from around the web

Waves Silver plugin bundle: now just $149
Get your hands on 16 professional award-winning plugins for music production, mixing and mastering all for an insanely low price of $79.99.View Deal

Save up to 95% on plugins at Plugin Boutique
Enjoy massive savings on plugins from a whole host of developers, including Arturia, Eventide, iZotope, KV331 Audio and many more.View Deal

PreSonus Studio One 4.5 Pro: was $399.95, now $279.97
Studio One 4 takes another step forward with the addition of Harmonic Editing, Patterns and the XT instruments. Get over $100 off this hugely popular DAW right now.View Deal

Aphex Vintage Aural Exciter: was $299, now $69.99
Modeled on one of only a few tube-powered units ever made, the Aural Exciter delivers all the unique character of the original hardware unit, with all the advantages of software.View Deal

Waves Abbey Road TG Mastering Chain: was $199, now $69.99
Now is your chance to get hold of five independent mixing and mastering modules, modelled after the EMI TG12410 Transfer Console used in all Abbey Road's mastering suites since the early '70s to this day.View Deal

PuigTecEQs: was $299, now $59.99
A bundle of the MEQ-5 and Puigtec EQP-1A EQ, which is a replication of the original hand-crafted unit owned by iconic producer/engineer Jack Joseph Puig (U2, Rolling Stones).View Deal

Waves REDD: now $49.99 down from $249
Another Abbey Road Studio icon can be yours for just a mere snip of its original price. Based on the legendary REDD.17, REDD.37 and REDD.51 consoles, Waves REDD plugin delivers the classic British sound of the 1960s.View Deal

Waves API 2500: was $299, now just $59.99
Modelled on API's vintage compressor, the 2500 boasts a wide range of incredibly musical parameters which have made it a favourite of engineers the world over.View Deal

C6 Multiband compressor: was $299, now $59.99
The ideal tool for de-essing and de-popping in the studio or onstage. The C6 gives you all the multiband compression and dynamic equalization you need to shape your sound.View Deal

Reel ADT: was $249, now $59.99
Waves/Abbey Road Reel ADT is the first plugin to successfully emulate Abbey Road Studios’ pioneering process of Artificial Double Tracking, putting the magic of that era in your hands within seconds.View Deal

H-Reverb Hybrid Reverb: was $349, now $59.99
Want richer, deeper reverb tails that sit beautifully in the mix while breathing crisp air into your tracks? H-Reverb is the plugin for you.View Deal

Abbey Road Reverb Plates: was $249, now $69.99
A state-of-the-art modeling of the four legendary reverb plates housed at Abbey Road Studios and used on recordings by the Beatles, Pink Floyd and Radiohead.View Deal

Smack Attack: was $69, now $49.99
Add smack and bite to drums, loops, synth hits and all percussive sounds by designing the level, shape and duration of their transients’ attack and sustain.View Deal