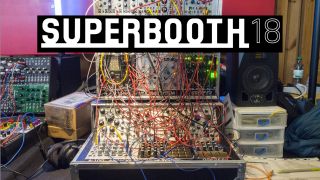 Now in its third year, Superbooth has quickly established itself as the premier synth event in Europe, if not the world. Decidedly less corporate than the trade-only shows, it’s open to public and press alike, and is both product showcase and interactive sonic playground.

Superbooth 2018 took place between Thursday 3 May and Sunday 5 May at Fez-Berlin, playing host to not only the big hitters of the synth world, but also myriad boutique manufacturers and creators who do this stuff for the love of it more than anything else.

MusicRadar hit the Fez hard, serving as your eyes, ears and hands as we got up close with the many new products that were on show and generally taking partaking in everything that Superbooth had to offer. Here's what happened...

Superbooth 2018 video: The Dreadbox Erebus puts on a bit of weight with new features

Superbooth 2018 video: This Is Not Rocket Science Edgecutter and Wobbler demoed

Superbooth 2018 video: Dada Machines Automat toolkit is taking techno out of the box

Superbooth 2018: Audio Damage’s Quanta might be the granular plugin synth that you can actually understand

Superbooth 2018: Roland adds four new models to the System-500 club as it expands its Eurorack offering

Superbooth 2018: You’ll soon be able to add custom oscillators and modulation effects to your Korg Prologue

Superbooth 2018: Syntonovo set to lift the lid on the Pan analogue synth

Superbooth 2018: IK Multimedia is promising a “paradigm shift”, but won’t say what it is

Superbooth 2018: u-he teases Eurorack module ahead of this year’s show