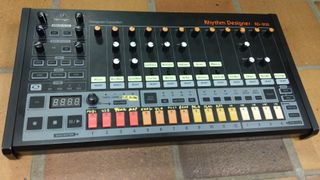 Superbooth 2018: Behringer took this year’s show seriously, bringing a veritable shed-ton of new products. We had already got wind of the VC-340 and Pro-One recreations, but weren't expecting to see Odyssey and TR-808 clones.

The Roland TR-808 is perhaps the most beloved drum machine of all time, so it’s little wonder that the Music Tribe firm has chosen it as its first drum machine clone. Of course, we shouldn’t really be surprised, as there had already been talk of creating a drum machine.

Luckily, it’s not just a straight up copy of the original, as Behringer has seen fit to throw in some new details, and the fact this is a full-size instrument should get people interested.

The RD-808 is fully analogue, and that includes the newly-added filter and waveshaper options. The filter is the same 2-pole variation that can be found in the Neutron semi-modular synth.

The waveshaper can act as a straight-up transient designer with attack and sustain controls, but you’re also afforded the option to assign multiple voices to it, so it could be considered as more of a bus compressor.

The RD-808 shown at Superbooth was very much a prototype and, as such, not all the features were operational. What is promising is that Behringer hopes to be entering full production soon, and we could be seeing units in the shops as soon as the autumn.

Unfortunately, there’s no word on price, but as it’s Behringer we assume the RD won’t be selling for silly money like the original. Keep an eye on the Behringer website for more info.