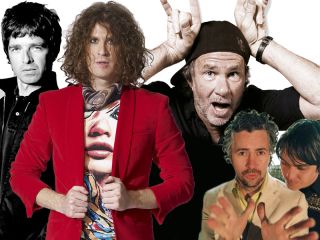 MusicRadar podcasts are now on iTunes

Intrepid MusicRadar reporters always endeavour to bring you closer to the people behind the music. Kings Of Leon, Noel Gallagher, Joe Perry, Frank Black and Kim Deal of The Pixies, Chickenfoot - we've got 'em all and many, many more.

Here's our ever-growing index page of all the conversations so far. Don't forget to keep an eye out for the 'your questions' features, where we give you the chance to demand some answers.

Richie Sambora
We catch up with Richie once more, this time to talk about songwriting, soloing and Bon Jovi's new album.

Melissa Aur der Maur
The ex-Hole, Smashing Pumpkins bassist on those bands and her solo work

Gov't Mule's Warren Haynes
The triple-threat guitarist (Govt' Mule, Allman Brothers, The Dead) on keeping it all together.

The Cribs
Johnny Marr and Ryan Jarman. Plus, Johnny entertains MusicRadar's offer to reunite The Smiths

Pixies' Kim Deal
The bassist talks The Breeders and Pixies

Dhani Harrison
George's son on his father, his new album and The Beatles: Rock Band

Joe Perry
The Aerosmith guitarist on touring with ZZ Top

Mastodon's Brent Hinds
How the metal goliaths made Crack The Skye

Bryan Adams
The Canadian hitmaker on three decades of hits

Mick Fleetwood
Mick says: "this is the best time to see Fleetwood Mac." Find out why...

Yngwie Malmsteen
The guitar legend talks about "going to extremes", his signature Strat and much more...

Torry Castellano
A revealing chat with the beat behind The Donnas

Billy Sheehan
A lively conversation with the bass master

KT Tunstall
We chat with the Scottish phenomenon