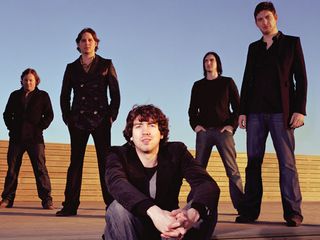 Lightbody (centre) is on an impressive 'Run'

Snow Patrol's Gary Lightbody has his first Number 1 smash. Only the version that's topping the charts isn't by his band, it's sung by Leona Lewis, an X Factor diva who has placed the five-year-old song on the top of the UK and Irish charts.

Which is fine by Lightbody, who is now seeing Snow Patrol's original version of Run re-appear on the UK charts at number 29. "A life of its own," Lightbody says. "It's a beautiful thing."

The two versions couldn't be more different. Snow Patrol's rendering is dark and moody, while Leona Lewis's is big-time pop. "That's what you want a song to do," says Lightbody. "Different interpretations and meanings. Songs aren't monolithic, at least the good ones aren't. What Leona Lewis has done has touched hearts."

Lightbody knows of where he speaks. He's on an impressive hot streak, penning the worldwide hit Chasing Cars from Snow Patrol's 2006 multi-platinum-seller Eyes Open. And from all appearances, his band's new disc, A Hundred Million Suns, will further the line. The first single, Take Back The City, is still on the charts, while a new song - the big pop number - Crack The Shutters, feels and sounds like another juggernaut about to happen.

It's been a long climb for the Northern Ireland-born Lightbody and his Scottish outfit Snow Patrol. Since forming in the mid-'90s, they've played every hellhole and dive imaginable, but through a steady string of releases and patient marketing (unheard of in these times), they've gained a sizable following.

"The success of Run is obviously brilliant," says Lightbody. "I won't have to worry about bills for a long time. But the main focus is that Snow Patrol is a band, a band that means it, and we're in this for the long haul, as you say. Hit singles can come and go, but Snow Patrol is on solid ground. Count on us being around."

MusicRadar caught up with Lightbody on the last day of Snow Partrol's whirlwind US promotional tour - the band will be back for an extended stay next year. Speaking on his battery-weakened cell phone backstage at a Los Angeles radio station Christmas bash, Lightbody talked about his current chart-topper, his approach to songwriting (200 songs for one album, all on GarageBand) and why he's playing more guitar than ever.