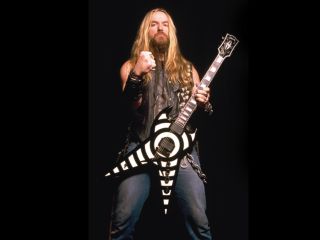 Zakk Wylde almost took a day off. The afternoon before this MusicRadar podcast, he was sacked out - and planned to stay that way, the best to remedy a three-sheets-to-the-wind night out. "Just kickin' back with my boys," he says in his gruff drawl. "Sometimes you just gotta roll with what's rollin', you know?"

But, as luck would have it, business intervened by way of Jim Dunlop (he of the effects pedals and guitar accessories), who dropped by for a meeting to discuss some new products. So Wylde did what he always did: dragged his butt out of bed and got on with it. "At that point, my day off was shot to hell," he says, laughing. "I've gotta be realistic. I've got a wife and three kids - there are no days off anymore!"

For Wylde, it doesn't seem as though there ever were any. As a New Jersey teenager, he spent half of his time slamming heads on the football field and the other half cutting imaginary ones in his bedroom, where he practiced the guitar feverishly. In 1987, he was rescued from cover band obscurity by his idol Ozzy Ozbourne, who chose the then-19-year-old to replace guitarist Jake E Lee (who himself had replaced the deceased Randy Rhoads). Over the next 20 years, Wylde would become not only Osbourne's guitarist, but like Rhoads, his musical partner and confidant. And with his own band, Black Label Society, he would establish himself as a strong singer and solo songwriter.

Wylde's powerful playing (always through a Marshall, and on a Gibson or an Epiphone; he has his own line of Les Pauls and Flying Vs) characterised by extreme pinch harmonics, breathtaking runs of alternate picking, and even splashes of ‘chicken pickin', has set a new standard for hard rock and heavy metal. "I'm just trying to live up to my heroes," Wylde says. "All the people who inspired me - Father Randy, Father Page, Father Eddie, Father Jimi...all the greats. I'll never be on their level, but if I can just play on the same team, then I'm happy."

Wylde may often come across as a two-fisted drinker and hell-raiser, but when it comes to musicianship he continually stresses his unwavering belief in dedication to his craft and the need to constantly improve. Whether it's lifting weights or vigorously practicing scales, he points out that "it's all about the grind. The results are there if you want to dwell on them. But to me, it's all about the doing. And never ever stopping.”

Listen to the interview podcast below, and find out more about Zakk Wylde at www.blacklabelsociety.net

Part one - Zakk talks about his early days, his big break with Ozzy, and a most unusual guitar.

Part two - Zakk on his relationship with Ozzy now, his approach to soloing, and the importance of "leading by example".