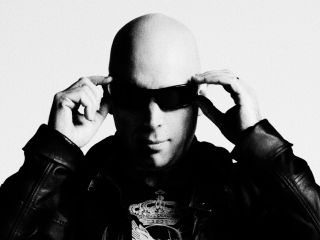 On his 13th studio album, the wackily titled Professor Satchifunkilus And The Musterion Of Rock, Joe Satriani does something extraordinary.

Actually, he does it repeatedly: amidst all the wham-bam guitar gonz and the hey-listen-this-this! squeals and whoops that never fail to elicit head-shaking awe, he injects heaping doses of humanity into the action. Jacked-up self-amusement mixed with empahy, pathos, curiosity, and the gravity of life's burning questions - is this what it means to be a guitar hero in the 21st Century? It is if you're Joe Satriani.

In this exclusive MusicRadar podcast, Satriani talks about his new album, the obstacles he faced in trying to outdo himself yet again, and the process of building the ultimate distortion pedal, the upcoming Vox Joe Satriani Satchurator.

Listen to the podcast below, and find out more about Joe Satriani at www.joesatriani.com. There's also a series of podcasts about Professor Satchifunkilus And The Musterion Of Rock on Joe Satriani's website.

Part one - Joe talks about his early days, teaching Steve Vai, and the hit that was Surfing With The Alien.

Part two - Joe on the making of the new album.

Part three - Joe talks about growing as an artist, and his new Vox Satchurator distortion pedal.