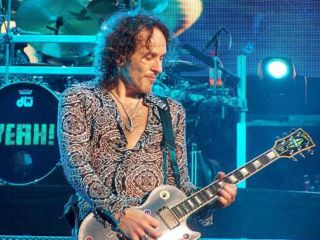 Still the new kid in town

It's been 16 years since he joined Def Leppard, but guitarist Vivian Campbell is still known as the "new guy in the band." But when you consider that members Joe Elliot (vocals) and Rick Savage (bass) formed the Leps in 1977, and drummer Rick Allen came aboard a year later (guitarist Phil Collen, who replaced Pete Willis in 1982, is now a lifer), the new guy status is a cross Campbell will have to bear.

And he does so, happily. Having logged time in Dio and Whitesnake with noted tyrants Ronnie James Dio and David Coverdale, the Northern Irish guitar player has found his tenure in Leppard to be "a sustained pleasure. This is the band I was destined to be a part of."

Seemingly impervious to changes in musical fashion, Def Leppard continue to thrive. Their latest release, Songs From The Sparkle Lounge, is their perkiest effort in years, and even finds the pop-metallurgists teamed with country boy Tim McGraw on the track Nine Lives. "Working with Tim was fantastic," says Campbell. "But I think he was more in our world than the other way around. Put it this way: nobody's ever going to mistake Def Leppard for a country band!"

Before hitting the road with Lep for yet another summer tour bonanza, Campbell sat down with MusicRadar to discuss his role in the band, working the blues into pop and how he's dealt with big-headed lead singers (no, we don't mean Joe Elliot).

Vivian Campbell interview part 1 - Download (right-click and Save As...)

Vivian Campbell interview part 2 - Download (right-click and Save As...)