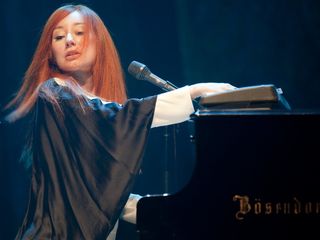 Tori Amos loves to stun and surprise, and with her newest album, Midwinter Graces, she's thrown another left curve at fans who delight in her idiosyncratic musical stylings.

Although the record is most certainly a holiday offering, Amos, the daughter of a Methodist minister, perfers to call it a 'seasonal' or 'solstice' album. "As you know, I don't like to dwell on the familiar," she says. "That just doesn't interest me - and I don't think my audience wants me to give them what they can get elsewhere."

Still, the idea of a holiday record intgrigued Amos, and once she threw herself into the project (recording it in stages while on tour over the summer), she did so with characteristic aplomb, eschewing played-out standards such as White Christmas but putting her own spin on lesser-known traditional numbers like What Child, Nowell and Star Of Wonder. The results make for an enchanting, bewitching and altogether intoxicating listen.

Midwinter Graces isn't merely a covers album, however; Amos has written five originals, including the lush love ballad A Silent Night With You, the torchy Pink And Glitter (which finds the artist venturing assuredly into big band territory) and Winter's Carol, the latter song offering listeners a preview of her upcoming musical, The Light Princess.

There's not a saccharine nor shocking moment to be found, and Amos admits this might be one of the record's most starting aspects. "I'm known for pushing people's buttons with my music, and here I'm holding out a nice pillow for them to rest their heads on.

"But that's OK," she adds. "Things are hard these days. People need a little comfort, some hope. If I can do that in even some small way, how can I feel I'm not doing my part as an artist?"

MusicRadar caught up with Tori Amos recently to talk about her new album, her views on holiday songs and her beloved Bosendorfer piano. Somewhat humorously, the subject of her mother kept weaving its way into the conversation.

What led you to record Midwinter Graces? I understand there were suggestions from both your father and the head of your label, Doug Morris.

"Yes, which is kind of fascinating for me because my father is a Methodist minister and Doug Morris is a liberal Jewish guy. My dad has been after me to do a Christmas record since I was two years old.

"After I did South By Southwest [in March of this year], Doug said to me, 'Look, I've always wanted to know what you would do [on an album like this], because a lot of us are excluded. In the carols, particularly in stanzas three, four and five, usually the Christology kicks in and you're already involved in the Crucifixion before you finish the song.' He said, 'I just want to celebrate the rebirth of light. Why can't some of these carols be more inclusive instead of exclusive if you don't buy the whole thing hook, line and sinker?'"

"He was on to something, but what he didn't know that I knew was that a lot of the carols were not Christian - they came from sea shanties or were pop songs of the day.

"Imagine in 300, 400 years from now, people are singing the song Billie Jean, but instead of [sings] 'The kid is not my son' they sang 'And Mary had a son.' So you start to thinking, Where do these songs come from? And how can we bring them to a 21st Century place without offending people like my mother, who loves the carols?"

Apparently, everyone's been after you to make this record your whole life. What was the deciding factor for you to finally do it?

"I like a challenge. So when Doug said, 'Tori, you can't offend your mother, but I want to like it, too.' And I'm thinking, Geez…what a thin ice patch I have to walk on. And yet, I wanted to make something that was part of tradition and variations on a theme.

"It's an old baroque tradition; it's part of the classical world that's been going on for hundreds of years, and that's what the people who did variations on the carols we sing today did. So, really, I'm just part of that tradition in the 21st Century."

You have a mix of traditional songs and some originals on the album. Tell me about one of the songs you wrote, A Silent Night With You, which is a love song.

"It is a love song. Doug really encouraged me to do this. He talked to me a lot about feelings he had when he would listen to the carols, and he said that sometimes they wouldn't bring him to a religious place; they'd bring him to a nostalgic place. We talked about this particular idea, and I went away thinking, My mother is going to lose her mind if I do anything to Silent Night!" [laughs]

Your mother looms very large on this album!

"My mother is very close to my heart. If you met her, she would sit you down with some fried chicken and she'd become your mother. She's everybody's mother. Anytime people meet Mary, they want her to adopt them. So, as you can imagine, you don't want to hurt Mary. But at the same time, she loves this song. She adores it."

"It took me time, though…I went off to Florida in the heat and the 100 degrees, and I started to think, OK, I'm a person who is married and is in a great relationship. But sometimes we don't appreciate what we have. And at Christmas or 'the season,' it's a time when we start looking back. I wanted to write a song where, believe it or not, the two people both value what they have.

"Also, in this time, people have had to rethink what's important. Material things aren't as easily gotten as they might have been five years ago."

"Times are harder. So you start thinking, Well, where is my gold? And the gold in this song is in each other, in their relationship."

You add quite a Middle Eastern vibe to the song Star Of Wonder.

"When I was a little girl and would hear the song We Three Things in the Methodist church - and you know, we love the Methodists, and they teetotal…[laughs]…and they didn't swing their hips too much. But If you go to the black Methodist churches, they are rocking! And I always thought to myself, Where are the Persians? Because in this song, I don't hear them, feel them - and we should.

"So, when I started gathering songs that I wanted to do and rework, I thought, We need a little Led Zeppelin on Star Of Wonder."

[laughs] You were thinking, What would John Paul Jones do?

"That's what I was thinking."

Tell me about the song Holly, Ivy and Rose, on which your own daughter, Natashya, sings - and quite beautifully, I must say. How old is she?

"She just turned nine in September, so she was eight when we recorded this."

How did it come about that she sang on the track? Also, does she want to follow in her mother's footsteps?

"She wants to be in theater. She loves story - and I think acting and singing are both part of telling stories for her.

"It all began because my niece, Kelsey Dobyns, who is 17, sings on Candle: Coventry Carol, and I think Tash was fascinated with that process. She had come up with the idea to do a bit of a bawdy song, and I said, 'No, I don't think that's appropriate.' [laughs] So she said, 'Will you come up with something that is appropriate, Mummy?' And I said, 'Yeah, let me work on it.'"

There's another song on the album, A Winter's Carol, which I read is a bit of a preview of another work you're going to be doing…

"This is a song from The Light Princess that I wrote for the musical, which will be sung by the whole cast. I did a version that's kind of 'Tori-fied.' I was thrilled that the Children's Choir in New York, P.S. 122, did a version of it.

"I was in tears when I saw the children singing it because I thought, That's right - it's supposed to be a choral arrangement. And children will be singing it in The Light Princess. It just worked out. It was as if the director of the Children's Choir knew what it should be."

One of the hallmarks of this album is your piano sound. You play a Bosendorfer, which is, by now, one of your trademarks.

[dreamily] "I love them. They're my lady friends."

What do you love about them in particular?

"Um…you can affairs with them and not end up on the front pages of the newspaper! [laughs] And you can have affairs with as many of them as you want and they won't rat you out. And you can still remain monogamous with your husband, which is fantastic. So it really works.

"They're sexy, they're alive, they're my best friends. I don't know how to explain it - they're real creatures to me. I crawl up under them sometimes when I'm lonely. And if I'm having a bad day, I just go lie on her. She plays me when I'm in live performance. It's not as if I play the piano; the piano plays you - if you allow it.

"You have to surrender to it. And obviously, you have to have the chops so that you can have the facility in your fingers. But really, it's a spiritual relationship with the essence of the piano itself."

Your regular drummer, Matt Chamberlain, plays on the album. He's quite an elastic drummer who can handle many styles, but what was it like for him to tackle some of these traditional holiday music?

"The key was getting the right instruments. We got in things like concert bass drums, concert bells in two octaves, tubular bells - all kinds of percussive things so Matt had to correct palette to work from. That was the key: finding him the right ingredients and taking him off the kit pretty much. But the bed was made from classical percussion, and that's why it worked."

Well, it's a wonderful album, Tori, and quite a nice surprise.

"That mean a lot. What I so happy about is that I'm still friends with Doug and my mom. [laughs] And my dad, too. He said, 'Look, you've just done what the Christian musicians such as Charles Wesley, John Wesley's brother, have done. He took music from other sources and added his Christology to it, and what you've done is taken that yet again and brought in more of a modern 21st Century perspective of a woman who believes in equal rights for all people.

"A lot of the carols, as you know, were written at a time when women weren't working, they didn't have a lot of rights, the suffragettes hadn't happened yet - it's important to realize the context from where they came from. We're in a world now that believes in equality. In some ways, when these were written, I think that things were worse for women than when Queen Elizabeth I was in power."

So I guess that's why you didn't include Grandma Got Run Over By A Reindeer on the album.

What would your mother have thought of that song?

"That would make her laugh, I think."