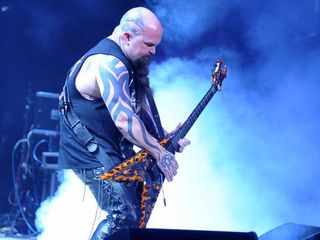 Slayer guitarist Kerry King knows a thing or two about heavy. Heavy riffs, heavy lyrics, heavy sound - "We didn't write the book on being heavy," he says, "but we might have authored the final chapter."

Speaking to MusicRadar for an exclusive podcast (listen below) from the backstage area during a stop on the Rockstar Energy Drink Mayhem Festival, King waxes philosopical on the art of deepness maximus.

Asked if the band tried to outdo their legendary crushing sound on the forthcoming World Painted Blood, the guitarist says, "There's really no point, because we're as heavy as you can get. What are you gonna do? In my opinion, there's no room for improvement."

At the time of our interview, MusicRadar hadn't heard a lick of music from the new album ("We still haven't technically turned it in to the record company," King says), but yesterday we got a taste of what's to come in the form of Hate Worldwide, a bracing series of jabs and bodyslams which wastes little time knocking one to the floor.

World Painted Blood, due later this year, was produced by Greg Fidleman, and according to King the time contraints put on the band for recording resulted in more of a "retro" vibe. "We couldn't jerk off like we usually do," he says. "We just went in and crammed for the exam."

The guitarist also feels that the record is a more unified effort than some past albums. "[Guitarist] Jeff [Hanneman] was more involved, which makes for a more rounded record," says King. "With Slayer as an entity, it's better when we collaborate."

In this exclusive MusicRadar podcast, King discusses the making of World Painted Blood. In addition, he talks about his BC Rich Signature Series guitars, his beef with the band Killswitch Engage, and he even answers some of your questions. So strap yourself in and enjoy all that is Kerry King.

Liked this? Now read: 12 best amps for heavy metal, 10 best bass guitars under £300 and The top 10 stompboxes we can't live without