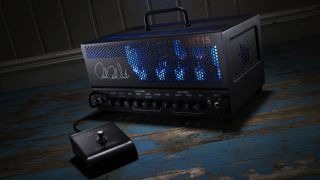 Let's cut to the chase: when we're talking about the best metal amps, what we're really talking about is distortion. If you want to get down with the heaviest tones, gain is everything. That said, you also need a distortion channel that retains clarity while remaining tight and with a smooth top-end. While this seems like a big ask, thankfully these mythical beasts exist.

We've spent years playing through the finest metal amplifiers, across a range of budgets too, so you won't need to remortgage your house if you're planning on buying one. Each of the heads and combos feature in our best metal amps guides dishes out a rich distorted tone, with enough heft and resonance to dig into everything from fat Metallica riffs to classic Maiden, plus seven- and eight-string djent. Before we unveil our top choices, here's what you need to known about the current cream of the metal amp crop...

If you’re looking for the most direct route to world-class heavy tones, Peavey’s Invective 120 Head is where your money is best spent. Designed by djent pioneer Misha Mansoor, the Invective updates the 5150/6505 for a whole new generation of metal guitarists, with three channels, MIDI switching, programmable boosts and a convincing DI output.

For anyone on a tighter budget, you really can’t go wrong with Mark Tremonti’s PRS MT 15 lunchbox head. A meticulously assembled 15-watter, the MT 15 delivers boutique-vibed distortion tones for a modest outlay, all while boasting a snappy clean channel and switchable LEDs. They're both superb choices for our best metal amps guide, and will suit a range of metal guitarists.

How to buy the best metal amp for you

As we mentioned above, when assessing what makes the cut for the best metal amp, a killer distortion channel is flat-out essential, but there are a few other considerations you'll need to factor in too. Chief among these is budget, but you also need to think about what kind of venues you’ll be playing.

Many metal-orientated heads – for example, the Diezel VH4, Mesa/Boogie JP-2C, and EVH 5150III 50W EL34 – are designed to be played loud. That’s no problem if you’re already established on a local gigging scene, but if you’re just starting out, or playing in your bedroom, you probably want something a little more manageable.

That’s where solid-state and digital offerings strike a fine balance between live and home use. This includes affordable combos such as the Boss Katana-100, through to Hughes & Kettner’s solid-state Black Spirit 200, and pro-quality processors like the Kemper Profiler Head and AFractal Audio Axe-Fx III. Each of these metal amps is capable of delivering formidable high-gain sounds at any volume, making them suitable for the (home) studio and the stage.

You may also want to weigh up the importance of a clean channel. Increasingly, you can find utterly usable clean channels for those arpeggiated middle 8s, but some all-tube amp heads require you to compromise somewhat on your non-dirty sounds.

There’s also the question of effects when it comes to the best metal amps: solid-state and digital offerings come loaded with modulations and delays to bolster your sound, but traditional tube heads will give you a reverb at most.

External effects are likely to be more versatile in this regard, so don’t discount any amp that isn’t packed with bells and whistles: if it’s made the cut here, you can rest assured it has an effects loop (to keep your pedals sounding their best, post-distortion), not to mention tone to die for.

This is the best metal amp, hands down

Peavey’s 6505 (originally dubbed the 5150 before Eddie Van Halen parted ways with the company) has long been heralded as the contemporary metal head to beat - until now. Periphery mastermind and influential djent maverick Misha Mansoor partnered with Peavey to refresh the format for today’s players, and (forgive us) knocked it out of the park.

Offering a more refined, multi-layered distortion than its forebear, the Invective 120 packs a trio of channels - including a surprisingly accomplished clean - each with pre- and post-level controls and individual boosts.

Just about everything you could hope for has been covered, including a built-in noise gate, half-power switching and two assignable series effects loops. This really is the modern metal head perfected.

The Alter Bridge guitarist spec’d out this compact head to deliver professional-quality tones at an affordable price point, and he absolutely nailed it - you’d struggle to find better distorted tones for the money.

Two channels are onboard, but naturally, it’s the MT 15’s distorted side that’s the main selling point here, with the kind of saturated tones you’d expect to hear from boutique brands like Bogner or Diezel, but with a more manageable 15W output, which can be dropped down to 7W.

There’s also a Twin-voiced clean channel with switchable boost, plus a series effects loop – and even LEDs that change from blue to red when you kick in the distortion channel.

A top metal amp from the effects masters

Boss’s ingenious Tube Logic solid-state/DSP technology is the secret behind this versatile combo, which punches well above its price point in both features and tone.

Five voices are onboard: Acoustic, Clean, Crunch, Lead and Brown, with the latter providing the tight, high-gain solo tones of your dreams, while each sound can be stored in one of eight tone setting memories.

There’s a stunning array of effects included, too, spanning all the modulations, delays and reverbs you could ask for, as well as direct USB recording, power scaling, a choice of cabinet resonance and a built-in tilt-stand.

The best metal amp if you’re on a budget

Its proportions are ridiculously small, with a price to match, but underestimate the Micro Dark at your peril. This diminutive head is very much a real amp, boasting a 20W solid-state power stage teamed with a 12AX7 tube preamp.

The Micro Dark’s tones are utterly authentic, too, with sounds that capably ape the company’s $2,000+ Dual Dark heads and plenty of gain on tap.

Sure, it’s hardly versatile - there’s only one channel - but you’d be surprised how much mileage you can get out of the mid-tweaking Shape control, while a built-in CabSim emulation makes this a handy headphone amp, too.

Play prog metal? This is the best guitar amp for you

If your playing is of the prog-metal persuasion, you’d be hard-pressed to better this awe-inspiring head from the Dream Theater speed demon.

There’s also an abundance of voicing switches - including a Shred mode - built-in CabClone speaker-emulated DI output and 100/60W power switching, while serious tech-heads can control the whole lot via MIDI. The tones more than deliver, too, with the kind of fat, smooth high-gain sounds that have seen original Mark IIC+ prices soar in recent years.

This impressively put-together head distils Eddie Van Halen’s arena-demolishing tone into a 50W format, equipped with an EL34 power section, just like Eddie used back in the day.

Three channels do your clean, crunch and lead business, with a shared EQ across 1 and 2, and a dedicated EQ for the third. All three shoot for hot-rodded Plexi tones, and deliver on all fronts, with the kind of crystalline cleans, hard-rock crunch and hugely dynamic solo tones you’d hope for from an amp with this kind of lineage, making it one of the best amps for old-school metal tones.

Add in MIDI control, presence and resonance, and a series effects loop, and this is a pro-quality touring head worthy of the world’s biggest stages.

Solid-state amps sometimes get a bad rap, but the huge strides taken recently have produced some of the most reliable, tonesome amps you can buy today, and Hughes & Kettner’s Black Spirit 200 is one of the best metal amps around.

It’s the tones that really impress, however, with the kind of touch sensitivity you’d get from H&K’s all-tube offerings, while the Ultra channel is worth the price of admission alone, with plenty of definition for seven- and eight-string players.

The VH4 counts the likes of James Hetfield, Billy Corgan and Matt Bellamy among its artist roster, and with good reason: this German-engineered monster is truly a modern classic.

A 100W output is teamed with four preamp channels, each with their own distinctive tone, spanning clean, classic-rock crunch, high-gain rhythm and lead. Make no mistake: the cleans are nothing to write home about, but the defined, harmonically rich distortion sounds are truly among the best in the world.

What’s more, each channel has its own individual insert, while the effects loop can be configured as serial or parallel.

The amp modeller that defined the sound of djent is back and better than ever in its third incarnation, now boasting a redesigned user interface, colour screen and improved front panel.

Like its previous incarnations, the Axe-Fx III truly excels at metal tones, with the Ultra and FAS Modern models based on Peavey’s 5150 but taken to ‘perfect metal amp’ extremes, while there are some stunning Rectifier, VH4 and Marshall models, too. We haven’t even touched on the staggering array of effects.

While it’s not one for tube-amp purists or plug-and-play types, the Axe-Fx III represents perhaps the best all-around rig solution for modern metal players, particularly those of the djent persuasion.