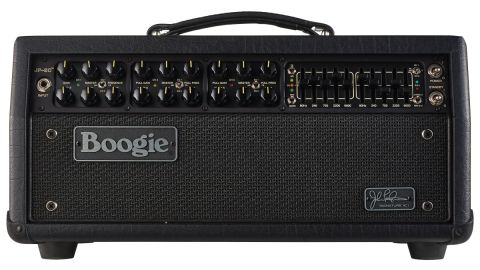 Whether or not you're a Petrucci fan, the JP-2C is an astonishing amp, aimed primarily at prog metal players, but with a lot of scope in all kinds of genres.

Now in its Mark Five incarnation, the modern Boogie is a three-channel multi-mode monster, bristling with knobs, switches and LEDs that control an almost endless list of functions.

However, there's still a hardcore following for the earlier, simpler versions, which remain highly usable today because of their exceptional build quality.

Out of all these, the final revision of the Mark II - the Mark IIC+ - is the most coveted, with clean examples selling way above their original retail price. Most of the Mark IIC+'s reputation is down to one person, Dream Theater's John Petrucci, who has been one of Mesa's biggest ambassadors for over three decades and a long-time Mark IIC+ user.

Mesa has now broken with tradition and produced its first ever non-limited signature model, the JP-2C, in recognition of Petrucci's outstanding association.

The JP-2C is contained in a short head cabinet, faultlessly finished in black vinyl.

The internals are typical modern Boogie with a neatly laid-out main PCB incorporating some of the quirks that date back to the original Mark IIC+, supported inside a beautifully finished aluminium chassis.

All the usual Mesa components are here: custom resistors, Orange Drop decoupling caps and a lot of relays, topped with a mains transformer that's about the same size and weight as a Mini Cooper.

This massive transformer is a key part of the early Boogie's mystique, helping to generate huge reserves of power.

But the most obvious and striking external feature of the JP-2C is its control panel, which comprises three independent channels and two separate five-band graphic EQs.

The EQs can be assigned to any combination of channels, as well as working off the supplied six-button foot controller, or through MIDI, which governs most of the JP-2C's switched functions. Each channel has identical (though differently voiced) controls for gain, master, bass, mid, treble and presence, together with an EQ assign toggle.

Channel 2 and the slightly higher-gain Channel 3 have push/pull switches on the gain and presence controls, which govern a gain boost and increased presence range.

The window surrounding the two graphic EQs has four more toggle switches: a channel changer, one to toggle the reverb on or off, another for the JP-2C's effects loop, and the last one is a new voicing that has been developed specifically for the JP-2C called Shred, which can be pre-set to work on Channel 2 or Channels 2 and 3.

On the rear panel there are separate reverb level controls for each channel; speaker, headphone and slave outputs; a pair of send/return jacks for the JP-2C's effects loop; and Mesa's excellent CabClone speaker-emulated DI output, complete with balanced XLR jack.

Just after this are the connectors that make the JP-2C even more versatile - MIDI In and MIDI Out/ Thru, together with a toggle switch to store patches and a rotary indexer to assign the JP-2C its MIDI channel. Finally, you'll see a large toggle that selects either 60 watts output or the full 100 watts.

The JP-2C powers on quietly and smoothly, with practically no hum and just a little hiss. While the channels lose some of the Mark V's multi-mode functionality, there's no loss of tone.

The clean channel's sweet treble and huge headroom are the perfect foil for aggressive and fast-attacking crunch from Channel 2, as well as the legendary Mark IIC+ lead sound from the supercharged Channel 3. It's a multi-layered distortion that's fat, warm and smooth, but with a vicious edge when you dig in hard.

This can be accented using the pull gain and presence controls, and the Shred switch adds another layer of smouldering harmonic intensity. The reverb is typical Mesa, with a quality that rivals some studio outboards, and the JP-2C's massive power supply translates into effortless volume that soars above lesser amps.

Signature products are sometimes double- edged swords - the artist's name is there to hopefully boost sales, but special features don't always appeal to a broad range of players.

However, in the JP-2C's case, we think Mesa has pulled off a rare success, teaming one of its biggest ambassadors with a truly killer head that's way better than we could have imagined.