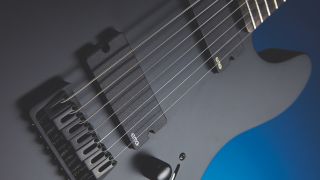 Investing in one of the best 7-string guitars is essential for anyone who is serious about playing progressive metal, djent, death metal or nu-metal. A seven string electric guitar enables you to cover some of the bass range without having to learn an entirely new instrument in the form of a bass guitar. In fact, for most guitarists, it only takes a few hours to familiarise yourself with the wider neck and extra string.

Though seven string acoustic guitars actually date as far back as the early 19th century, the first mass-produced electric version arrived in 1990 courtesy of Japanese manufacturers Ibanez. Developed with Steve Vai, who had already been using its prototypes, the new Universe model would go on to inspire new sounds and tones. Before long, bands like Dream Theater, Meshuggah and Korn popularised the heaviness of earth-shaking, down-tuned riffs, which you can tap into with the best 7-string guitars.

There was a time when 7-string guitars were few and far between in overall production, but thankfully things have changed. Originators and pioneers Ibanez have always been at the forefront of this style, but there are also worthy considerations from the likes of Jackson, Schecter and even PRS – all of which and more are covered in our guide to the best 7-string guitars.

You really don’t need to be a fan of Mark Holcomb’s band, American tech-metal masters Periphery, to appreciate this glorious signature 7-string in the PRS SE series. Naturally, the PRS SE Mark Holcomb 7-string djents with the best of them, but there’s a lot more to his guitar than just high gain tones – from its classy looks and comfortable body design to switchable single-coil sizzle. One of the best 7-string guitars money can buy.

If you’re looking for the best 7-string guitar that’s easy to play and super user-friendly, the Jackson Pro Series Dinky DK Modern Ash HT7 is it. In fact, to the point of being easier on the hands than some of the six-strings we’ve seen over the years. And though it feels small and compact, the tones are remarkably gargantuan.

Choosing the best 7-string guitar for you

Every 7-string guitar has its own unique features and selling points. Some models, like a few of John Petrucci’s signature instruments, feature whammy bars. Others might have active ceramic pickups, and some models, like the Cort KX500MS and Jackson’s X Series SLAT7, boast a slanted bridge and fanned frets for different scale lengths across the strings.

The main thing to consider when choosing from among the best 7-string guitars is comfort. An instrument that feels difficult to play might make your creative process unnecessarily cumbersome, while those who’ve had enough time to get to grips with extended range guitars may be looking for something with precision.

While there have been 7-string Les Paul and Explorer designs in the past, such as the Matt Heafy Epiphone Les Paul Custom, these guitars are more often than not cut as some form of super strat – with thinner bodies and necks to facilitate ease of play.

Some of the best 7-string guitars, like the Ibanez Universe and ESP E-II M-II 7, stick to the same scale-length as a Fender Strat (25.5”), and these models are often popular among lead players. The strict riffers out there, on the other hand, will generally opt for a stop-tail and prefer the tightness across the board that comes with having a longer scale-length like 26” or 27”, especially those who spend more time on the thicker wound strings.

If you’re playing a mixture of rhythm and lead guitar, you may enjoy gravitating  towards a fanned fret model that offers the best of both worlds. Or perhaps you’ll be tempted by other features like a whammy bar, built with infinite expression in mind.

Pickups are also worth consideration when shopping among the best 7-string guitars. Progressive metal guitarists might need a full scope of tones at their beck and call, from shimmering cleans and acoustic strums to brain-sizzling distortions, which is why the John Petrucci signatures are virtually unbeatable in versatility.

Other metal players, however, may have little use for Piezos, voicing switches or coil splits and find themselves better suited to something less complicated, with only high gain tones in mind. Ready to find the best 7-string guitar for you? Cool, then let’s take a look at these low-end stunners now…

It would be fair to say that 7-string guitars aren’t exactly a priority for a company like Paul Reed Smith, but this collaboration with Periphery axeman Mark Holcomb manages to bring their signature class and precision to the extended range world.

As you’d expect, it excels at those monstrous tones the tech-metallers are known for – with all the definition you’d ever need to cut through – but there’s plenty of versatility too, with a split-coil mode to tap into more glassy tones.

The passive Seymour Duncan humbuckers are hot but still incredibly responsive and musical, unlike the more compressed ceramic active-equipped competitors in this list. The two finish options are decent too, either a natural Satin Walnut or Mark’s own Holcomb Burst. An all-round winner in our best 7-string guitars round-up.

The 7-string guitar that started it all

It’s the original and, according to some, it’s still the world’s best 7-string guitar. For its time, the Ibanez Premium Steve Vai Universe UV70P was a futuristic machine that could harness the power of previously untapped registers, whereas now there’s an almost vintage charm to the Universe.

The HSH configuration also means that there’s plenty of tonal ground covered, from spikey in-betweens to full fat humbuckers. Ibanez are known for their fast, playable necks and that’s perhaps why this UV70P reissue continues to sell well to this day. One for all the Bad Horsies out there.

View at Andertons
Check Plugin Boutique
Check Thomann
See all prices (3 found)
Very easy on the fingers
Not bulky at all
Great-sounding, versatile tones
Swamp Ash is in short supply

Lightweight and easy to get to grips with, this recently released Pro Series Dinky has comfort at the forefront of its design. There’s virtually no sign of the bulkiness 7-string guitars have often been associated with. But it doesn’t end there… There’s a pair of active Fishman Fluence humbuckers with a five-way selector, coil-tap and voicing switch.

Bearing in mind swamp ash is now in short supply, and Fender have announced they’ll be descaling its usage across production, it might be worth getting one of these while you still can. This is the best 7-string guitar for doing pretty much everything.

Admittedly, this isn’t something many of us can afford without some serious planning, but considering John Petrucci was one of the earliest users of seven-string guitars, it brings an infinite amount of consideration to its craft.

From crystal cleans to screaming metallic abrasiveness, the DiMarzio Rainmaker humbuckers compliment just about anything you can throw at them and there’s also a byzantine switching system and built-in adjustable boost to give you that push wherever needed.

Then there are the Piezo sounds, which sound frighteningly wooden and percussive, delving into acoustic tones that are every bit as convincing as you’d be hoping for.  The true connoisseurs choice when it comes to all things 7-string guitar.

This Schecter definitely packs a lot into one compact instrument. The swamp ash body and flamed maple top feels comfortable and lightweight, while the carbon fiber reinforcement robs mean this neck will come as flat as it gets and stay that way.

It has a neck-thru construction so maximum resonance and ultra access through to the highest frets. Perhaps the main draw here is that it comes equipped with a Sustainiac pickup for infinite… you guessed it, sustain.

There’s also a Floyd Rose 1500 Series bridge, which only adds to the amount of expression this instrument is capable of. A truly versatile and modern weapon of mass destruction for lovers of low-end guitar.

One of the best 7-string guitars from ESP

Crafted in ESP’s Tokyo factory, this E-II puts forward a good case for being one of the best-looking seven-strings ever made. But on closer inspection, there’s a lot more going on here than just good looks.

It comes powered by a pair of direct-mounted Bare Knuckle Warpig 7st pickups which, despite being extremely high in output, manage to sound brilliantly musical and well-defined – as Bare Knuckles proved time and time again.

The hardtail hipshot bridge and string-thru body design will assist for maximum resonance and ensure your guitar will stay punchy where others begin to mud up. It also comes with Schaller straplocks, Gotoh locking tuners and an ESP hard case.

The best 7-string guitar for sheer value for money

If you’re on the hunt for a seven-string on a budget, or perhaps want something inexpensive to start out on, this Ibanez Gio will be hard to beat. It’s built well, holds its tuning thanks to the F107 hard-tail bridge and comes with a quilted maple veneer on a poplar body.

The Infinity R humbuckers are actually better than most other options in its price range, but still probably the main compromise to make this instrument so affordable. There are no split-coil options, alas, but the 5-way blade pickup selector can go a long way, especially at this price.

An affordable multi-scale beast for lead and rhythm

If you’re looking for an affordable model among our guide to the best 7-string guitars, and that boasts impeccable intonation with a traditional Fender-style scale length for the higher strings and tight thickness for the lower end, try this Cort.

The active EMG-707s are the seven-string version of the 85, which has long been one of their most widely used sets, and lacks little in terms of firepower. Finally, the Star Dust Green finish gives it the futuristic edge it so clearly deserves. A high-precision performance machine for not much money at all, in the grand scheme of things.