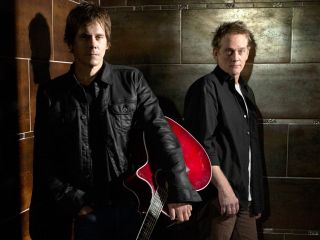 The Bacon Brothers, Kevin and Michael, perform for MusicRadar

Kevin Bacon calls himself a "workhorse actor," and he certainly has the resume to back it up. He even inspired a well-known game, The Six Degrees Of Kevin Bacon, as testatemt to his impressive resume.

But the celebrated actor is just as serious about his music, and for the last 15 years he's released a string of well-received albums and built a loyal live following with his brother, Michael, a professional musician in his own right who has scored countless films and TV shows.

Together they're The Bacon Brothers ("Now there's an inventive name for you," Michael says, with a laugh), and they have a new disc out that might just be their best effort yet.

Called New Year's Day, the album is a tough and engaging collection of folky, funky, bluesy rockers that one doesn't have to struggle to like. The tunes, by turns introspective (the title cut) and free-wheelin' (Go My Way), jump right out at you and stick in your memory long after you've heard them.

The Bacon Brothers invited MusicRadar to their New York studio for an intimate acoustic performance of two songs from the new album, Go My Way and Bunch of Words. The Philly-bred siblings' harmonies blended effortlessly right on the first take. "We practice a lot," says Michael.

Afterwards, Kevin and Michael sat down for a MusicRadar podcast interview, during which they discussed the recording of New Year's Day, the way Hollywood views actors who play music and their influences as artists. And Kevin even shared a surprising tidbit about Footloose!

Check out The Bacon Brothers music video performance below.

Listen to the podcast interview below.
Download (right-click and Save As...)