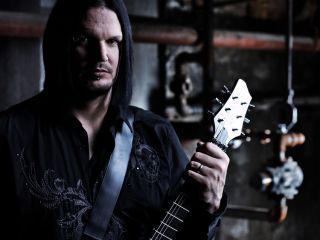 Raising fists and devil's horn signs on the new CD

Since busting out a mega-sized hit with 2000's Down With The Sickness, the Chicago band Disturbed have been making good on their bid for worldwide metal supremacy. Central to this mission is guitarist Dan Donegan, whose Homeric riffs and sweeping solos never fail to elicit raised fists and devil horn handsigns.

When he's not dispensing sheets of shred on tracks such as Stricken and Land Of Confusion (the latter being Disturbed's inspired cover of the Genesis hit), Donegan immerses himself in guitar and gear design. His Washburn Custom Artist Series Guitar is an impressive best-seller, and his Digitech pedal called The Weapon has been making one heck of a racket since its release. "I'm not interested in just putting my name on a product," Donegan explains. "For me, it's all about trying to improve upon something, to put my own spin on it and see if I can take it to a new level."

Speaking of new levels, there's Disturbed latest CD, Indestructible, due out June 3. The band's angriest and most politically charged effort to date features Donegan front and center - each song contains either a significant riff or a solo of head-shaking proportion, assuring his place in the pantheon of guitar greats.

MusicRadar caught up with the earnest and affable guitarist for an extended interview that covered a wide range of topics. Listen to the podcast below. And for more information on Disturbed, visit the official Disturbed website.

Part one - Donegan talks about his Washburn guitar, achieving stardom, and performing for the troops

Part two - He discusses his gear, the new album, his influences and work ethic