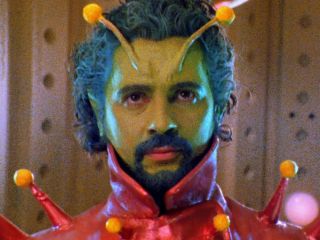 Coyne's first film is out of this world

"Most of our albums have been like hallucinogenic movies," says Wayne Coyne, lead singer and frontman for The Flaming Lips. "So it only made sense that the first film I made was pretty trippy."

And when your directorial debut is a movie called Christmas On Mars, and you've spent the better part of seven years shooting it in your Oklahoma City backyard using members from your band as actors, well, it's bound to be trippy.

"Nobody knows what to expect from a Flaming Lips album" says Coyne, "so I can't imagine they'd have proper expectations about a movie connected with the Lips - other than, you know, 'Is it way-out and weird?' You know what I mean?"

Christmas On Mars is way-out and weird all right. It's also charming, dark fun that's destined to win the hearts of cult-movie lovers everywhere. The 86-minute film about, yes, Christmas On Mars is receiving limited-engagement screenings in theaters, but it's also available on DVD and as a deluxe DVD/CD package that includes a 12-track original score by The Flaming Lips.

"That way, people can feel like they have a Flaming Lips record before we actually put the next one out," Coyne jokes.

As for The Flaming Lips, the "little train that could" that Coyne has led since 1983, they'll have an album out next year. And like all Lips records, such as modern-day classics such as The Soft Bulletin and Yoshimi Battles The Pink Robots, it'll be "a musical fantasy that's well worth experiencing, if you're into musical fantasies," says Coyne.

MusicRadar spoke with Coyne recently about the process of making Christmas On Mars. The candid and engaging band leader seemed relieved to be putting the film behind him.

"People have compared me to Axl Rose," he says during a pre-interview conversation. "Which I guess is fair. When you talk about making a movie for seven years, you expect a Cecil B DeMille epic, not something I shot in my backyard when I had the time."