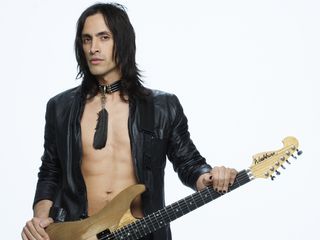 "It'd be nice to take the world by storm again," says guitarist Nuno Bettencourt. "But the most important thing is that we take ourselves by storm."

Bettencourt is talking about Extreme, the Boston-based hard rock band he's reformed after a 13-year break. Back in the late '80s and early '90s, Bettencourt became a guitar god and the group enjoyed a spectacular rush of success - although, ironically, it was the non-shred, pre-Unplugged acoustic ballad More Than Words that sold their CDs.

By the mid-'90s, however, the group splintered ("the usual nonsense and drama") and Bettencourt formed a succession of bands, most notably DramaGods and Satellite Party (with Jane's Addiction's Perry Farrell, while vocalist Gary Cherone served the shortest stint in history in Van Halen.

"A band is like a marriage," says Bettencourt (himself married to Baby Animals vocalist Suze DeMarchi) "you don't know why it works, but when it does, everything feels right." And Bettencourt is feeling pretty right about being back with Cherone, bassist Pat Badger and new drummer Kevin Figueiredo - the foursome are set to release Saudades de Rock, a blazing return to form that makes the 13-year wait seem somehow worth it.

(Want a preview? Click this link for a MusicRadar exclusive stream of the album's lead-off track Star.)

Bettencourt recently sat down with MusicRadar for an extensive interview. The ever-opinioned guitarist spoke effusively about the current state of music, the ongoing influence of Queen, getting the old gang back together - and he even answered your questions. Bettencourt is every interviewer's dream: you just wind him up and let him go.

Part one - Reforming Extreme, More Than Words, new bands vs. old
Download (right-click and Save As...)

Part two - Props to Joe Bonamassa, sharing the stage with Queen, the new album
Download (right-click and Save As...)

Part three - Nuno answers your questions
Download (right-click and Save As...)