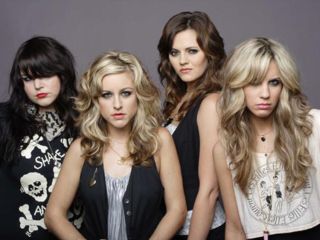 Since forming in 1993 to perform for an eighth-grade lunchtime talent show, The Donnas (Brett Anderson, vocals; Maya Ford, bass; Allison Robertson, guitar; and Torry Castellano, drums) have been handing it back to the boys big-time with their kick-ass, let's-party brand of rock and roll.

Big breaks came easy for the California-based band. Before they graduated high school, they had toured Japan. A deal with Lookout! Records led to the band signing to Atlantic in 2001. Albums such as 2002's Spend The Night and 2004's Gold Medal garnered critical raves and won the band fans at all points on the globe, but not enough of them to maintain a major-label deal. Unbowed, The Donnas formed their own Purple Feather Records label, and in 2007 released their most bracing album yet, Bitchin'.

Through it all, the driving force behind The Donnas is Torry Castellano. The petite powerhouse rocks her Pearl kit with an almost tectonic force. Perhaps the reason she plays with such passion is the fact that she's lucky to be playing at all: In 2003 an acute case of wrist tendinitis (caused by holding her sticks wrong) almost ended her musical career. But through surgery, physical therapy, and a new approach to drumming, Castellano is back on the throne, and better than she's ever been.

MusicRadar caught up with Torry Castellano backstage for a podcast interview before a recent Donnas show in New York City. Listen to the podcast below, and there's more information on The Donnas' official website.

Part one - Torry discusses the band's formation, growing pains, and being tagged as 'punk.'