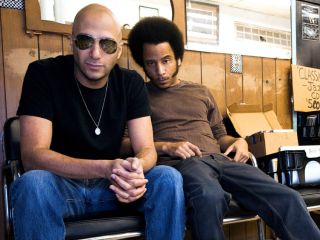 A collaboration with rapper/emcee Boots Riley of The Coup, Street Sweeper Social Club are sure to warm the hearts of music fans who were missing the seismic riffs and searing solos largely absent from Morello's work of late.

"Not that I was M.I.A. from the big guitar scene," Morello is quick to point out. "For two years now I've been playing live shows with Rage Against The Machine. That still counts. But yes, if you're going on my recent recorded work alone, fair enough, I've been a folkie with an acoustic guitar. Guilty as charged!"

Produced by Morello (he also plays bass on the album) Street Sweeper Social Club's self-titled debut, to be released 16 June, is an 11-song machine-gun blast of rap-metal that gloriously recalls the politically-charged fury of Rage Against The Machine and bears not a trace of the tamer, arena rock sound of the guitarist's follow-up band, Audioslave.

Morello, however, is quick to draw a distinction between Rage and SSSC. "My guitar playing is my guitar playing - for better or worse, I have a style. But Boots and Zach [De La Rocha] are night and day as lyricists and rappers. Apples and oranges, man!"

"Still," he adds, "if you're a Rage fan, you might like Street Sweeper Social Club - that's OK with me."

Currently on tour with Nine Inch Nails and Jane's Addiction, Tom Morello spoke to MusicRadar from his hotel room in Baltimore, Maryland. "I'm having more fun than a person has a right to," he says of the summer jaunt. "But playing shows is always the icing on the cake. The writing, recording, the planning - that's the behind-the scenes, creating-the-recipe stuff; that's the work."

In the podcast below, Morello talks about the formation of Street Sweeper Social Club, the status of Rage Against The Machine, guitars and gear and what we can expect next from an artist who's giving Jack White a run for his money.