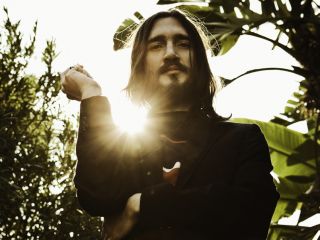 Like much of the music he makes, Red Hot Chili Peppers' guitarist John Frusciante is a riddle wrapped in an enigma inside a question. And he probably wouldn't have it any other way.

Frusciante has released a string of solo recordings through the years, albums filled with anxious, yearning metaphysical mood music, songs that seem to exist without the imprint of craft but are bursting with intellect and emotion.

"The drive to create music that is pure is my highest priority," says Frusciante. "Sometimes I'll get extremely technical in my approach, and other times I'll just kind of go with the gods of music. I think an artist has to answer to whatever spirits are guiding him. Even if they're in conflict, that's OK."

On Frusciante's latest album, The Empyrean, the guitarist plays by no known rules and the result is a collection of songs that are challenging and poetic but never conventional. They hover in the air and land in special, secret places. From the feedback-drenched lyricism of Before The Beginning to the guitar psychodrama of Enough Of Me (the latter of which features a gutsy, full-throated vocal performance) to the haunting beauty of Song To The Siren (a Tim Buckley original), this is a record that will stick with you in both waking and sleeping moments.

The subject of the Red Hot Chili Peppers is something of a sore spot for Frusciante. For the duration of our podcast interview below, the guitarist spoke voluminously about his new album. But a fairly rote question about the status of the Chili Peppers left him lost for words. When he recovered, he stated emphatically that the group had "no plans". This differs wildly from what drummer Chad Smith said in a MusicRadar interview just months ago.

Although the Peppers are on what has been described as a mutually agreed upon hiatus, Smith indicated the door was open to reconvene. To Frusciante, however, the door isn't merely shut; there's no door at all. The conflict...

Part One - The recording of The Empyrean
Download (right-click and Save As...)

Part Two - Working with Johnny Marr, guitars and sounds
Download (right-click and Save As...)

Part Three - John Frusciante answers your questions
Download (right-click and Save As...)